This article explains about the El Nino phenomena and its affect on Indian Monsoon. El Nino is one of the hot topics on which UPSC has asked questions frequently in IAS Prelims and Main Exam. El Nino has an overbearing on Indian monsoon which affects agriculture in India.

The Southern Hemisphere has a horizontal air circulation cell called as Walker Cell responsible for upwelling along the South American Coast and bringing rains in Australia. 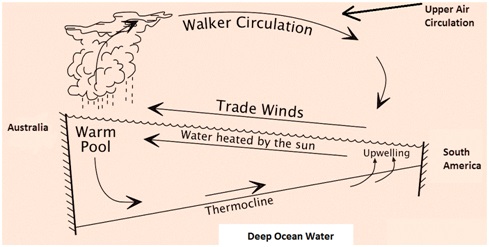 The Walker circulation is the result of a difference in surface pressure and temperature over the western and eastern tropical Pacific Ocean. A pressure gradient from east to west creates an air circulation from the Eastern pacific i.e. along the coast of Peru-Chile  to western Pacific(Australia-New Guinea).This  air circulation displaces surface water towards the western pacific causing cold water from beneath the ocean to move upward. Surface waters of ocean are warm and the water under oceanic beds is cold and contains various types of nutrients which are helpful for aquatic life. Sea bird along the coast of South America (eastern pacific) gets plenty of Phytoplankton and produce Guano which again is helpful for Aquatic life. So, fishing is a thriving occupation along the eastern coast of South America. On the other hand western pacific and Australia receives precipitation due Walker circulation.

This is a name given to the periodic development of a warm ocean current along the coast of Peru as a temporary replacement of the cold Peruvian current. ‘El-Nino’ is a Spanish word meaning ‘the child’, and refers to the baby Christ, as this current starts flowing during Christmas. The presence of the El Nino leads to an increase in sea-surface temperatures and weakening of the trade winds in the region. El Nino was originally recognized by fishermen off the coast of South America. 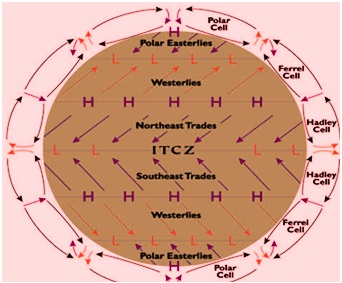 The difference in pressure over Tahiti (Pacific Ocean) and Darwin (Australia) is computed to predict the intensity of Monsoon. A negative difference of pressure means average and late monsoons. A feature connected with the SO is the El Nino phenomenon in which a warm ocean current that flows past the Peruvian Coast, in place of the cold Peruvian current in every 2 to 5 years. The Phenomena of El Nino together with Southern Oscillations is called as ENSO.

At times of El Nino the Peru-Chile coast witness rainfall along its coast which normally remains drier. The Upwelling which is evident in normal times seizes at the times of El Nino and gives set back to flourishing fish industry along the South American Coast.

Australia which used to receive rainfall due to Walker circulation witnesses forest fire and droughts. Indian Monsoon has an indirect overbearing of El Nino leading deficit rainfall and droughts. The most prominent droughts in India, six of them, since 1871 have been El Nino triggered droughts, including the recent ones that occurred in 2002 and 2009. Nevertheless, it is important to note that all El Nino years do not lead to drought in India. The year 1997-98 is a stark reminder as it was a strong El Nino year but that did not cause drought in India, in fact, rainfall was in excess. On the other hand, a moderate El Nino in 2002 resulted in one of the worst droughts.

The exact reason for occurrence of El Nino is still not known and the scientists have to cover a long distance to decipher this puzzle and its effect.