Check the important questions of UPSC IAS Prelims 2021 from the Ancient & Medieval History section. The mentioned questions are after analysis of the previous 5 years' papers and are important for the candidates preparing for UPSC IAS 2021 Prelims. 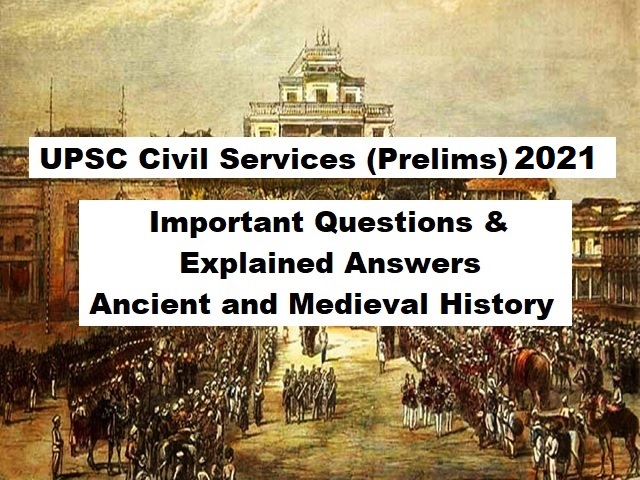 UPSC Civil Services (Prelims) 2021 exam is just six months away and aspirants must be in the last stage of their revision process. It is necessary that aspirants practice mock tests and solve previous year papers to know the type of questions asked in the exam. As most students practice subject-wise revision strategy it is helpful to solve questions from each subject separately. To help the aspirants execute their strategy well, we have provided all the questions asked from ancient and medieval history asked in the last 5 years previous year papers with explained answers.

Ques: Which one of the following is not a Harappan site?

Ques:  In which of the following relief sculpture inscriptions is 'Ranyo Ashoka' (King Ashoka) mentioned along with the stone portrait of Ashoka?

Explanation:  Kanaganahalli in Karnataka is the site with an inscription in Brahmi script reading Ranyo Ashoka and a sculpture of King Ashoka.

Ques: With reference to forced labour (Vishti) in India during the Gupta period, which one of the following statements is correct?

(a) It was considered a source of income for the State, a sort of tax paid by the people.

(b) It was totally absent in the Madhya Pradesh and Kathiawar regions of the Gupta Empire.

(c) The forced labourer was entitled to weekly wages.

(d) The eldest son of the labourer was sent as the forced labourer.

Explanation: Vishti was considered as a source of income for the state, a sort of tax by the people.

Explanation: In the Delhi Sultanate, the task of collecting revenue directly from peasant and measurement of land rested on Amils.

Mir Bhakshi was the head of militiary department in Mughal India whereas in Delhi Sultanate, Ariz under Diwan-i-arz (set up by Balban) was improved by Alauddin Khalji as he introduced Dagh system which was aimed to improve Horse quality as well as eliminate fake numbering.

Saint Nimbarka was a contemporary of Akbar.

Explanation: Nimbarka was a 13th century philosophical Saint whereas Akbar's time period was 1556-1605; Saint Kabir was a 15th-century poet whereas Sirhindi was in the 17th century.

Ques: With reference to Mian Tansen, which one of the following statements is not correct?

(a) Tansen was the title given to him by Emperor Akbar.

(b) Tansen composed Dhrupads on Hindu gods and goddesses.

Explanation: Tansen was the title given by Raja Vikramjit of Gwalior. Tansen was a court musician in the darbar of Raja Ramachandra of Bandavagarh (Rewa).

Ques: With reference to Indian history, who among the following is a future Buddha, yet to come to save the world?

Explanation: Maitreya is regarded as a future Buddha of this world in Buddhist eschatology. In some Buddhist literature, such as the Amitabha Sutra and the Lotus Sutra, he is referred to as Ajita. According to Buddhist tradition, Maitreya is a bodhisattva who will appear on Earth in the future, achieve complete enlightenment, and teach the pure dharma.

Ques: Which one of the following was a very important seaport in the Kakatiya kingdom?

Explanation: Some texts suggest that Motupalli, now in the Krishna district, was an important sea-port in the kingdom of Ganpati (an important Kakatiya ruler), frequented by foreign merchants.

Ques: With reference to the difference between the culture of Rigvedic Aryans and Indus Valley people, which of the following statements is/are correct?

Select the correct answer using the code given below:

Statement 2: The Indus valley people knew the use of copper, bronze, silver, gold but not iron. So, 2 is wrong.

Ques: Banjaras during the medieval period of Indian history were generally

Explanation: Banjaras were the most important trader-nomads during the medieval period.

Their caravan was called tanda. Sultan Alauddin Khaljl’s market regulation system could become successful unmanly because of the fact that he relied heavily on the banjaras to transport grains to the city markets.

Ques: Who of the following had first deciphered the edicts of Emperor Ashoka?

Ques: In the context of the history of India, consider the following pairs:

(1) Eripatti:    Land, revenue from which was set apart for the main¬tenance of the village tank

(2) Taniyurs:    Villages donated to a single Brahmin or a group of Brahmins

Which of the pairs given above is/are correctly matched?

Explanation: Statement 1: A special category of land Eripatti or tank land, was known only in south India, This was land donated by individuals, the revenue from which was set apart for the maintenance of’ the village tank, which indicates the dependence of the village on the tank for irrigation.

Statement 3: In South India centers of higher learning was known as Ghatikas. There was a famous Ghatika at Kanchi, drawing students from far and near. These Ghatikas were run in temples.

Ques: With reference to the economic history of medieval India, the term Araghatta' refers to

(b) land grants made to military officers

(c) waterwheel used in the irrigation of land

Ques: Regarding the taxation system of Krishna Deva, the ruler of Vijayanagar, consider the following statements :

The tax rate on land was fixed depending on the quality of the land.

Explanation: Statement 1: Land revenue was the chief source of income. The land was divided into four categories for purposes of assessment, wetland, dry land, orchards and woods. Usually, the share was one-sixth of the produce. Land revenue could be paid in cash or kind. The rates varied according to the type of crops, soil, method of irrigation, etc. So, 1 is clearly correct.

Statement 2: Besides land tax, many professional taxes were also imposed. There were on shopkeepers, farm servants, workmen, posters, shoemakers, musicians, etc. There was also a tax on property. Grazing and house taxes were also imposed. Commercial taxes consisted of levies, duties, and customs on manufactured articles of trade were also levied. Private owners of workshops paid an industry tax, which means 2 is correct.

Ques: With reference to Indian history, which of the following is/are the essential elements of the feudal system?

Explanation: Feudalism, in its various forms, usually emerged as a result of the decentralization of an empire: especially in the Carolingian empires which both lacked the bureaucratic infrastructure necessary to support cavalry without the ability to allocate land to these mounted troops.

Which of the above pairs is/are correctly matched?

Ques: Which of the following kingdoms were associated with the life of the Buddha?

The arrival of Babur into India led to the

introduction of gunpowder in the subcontinent

Explanation: Chinese gunpowder technology is believed to have arrived in India by the mid-14th century, but could have been introduced much earlier by the Mongols, who had conquered both China and some borderlands of India, perhaps as early as the mid-13th century. The unification of a large single Mongol Empire resulted in the free transmission of previously top-secret Chinese technology into Mongol conquered parts of India. Regardless, it is believed that the Mongols used Chinese gunpowder weapons during their invasions of India.

If statement 1 is wrong, the only possible option is B.

Ques: Who of the following founded a new city on the south bank of a tributary to river Krishna and undertook to rule his new kingdom as the agent of a deity to whom all the land south of the river Krishna was supposed to belong?

Explanation: He was the founder of Vijayanagar Empire.

His initial military exploits established his control over the valley of Tungabhadra River (a tributary of Krishna), and gradually he expanded his control to certain regions of Konkan and Malabar Coast. By that time Hoysalas had lost its last ruler Veera Ballala III who died fighting the Sultan of Madurai, and the vacuum so created facilitated Harihara I to emerge as a sovereign power. The entire Hoysala territories came under his rule directly.