Drama/Theatre are an important part of the Indian cultural heritage. Check below 10 important questions on the various theatre forms in India which is included in the Indian Heritage and Culture syllabus of the UPSC Civil Services exam. 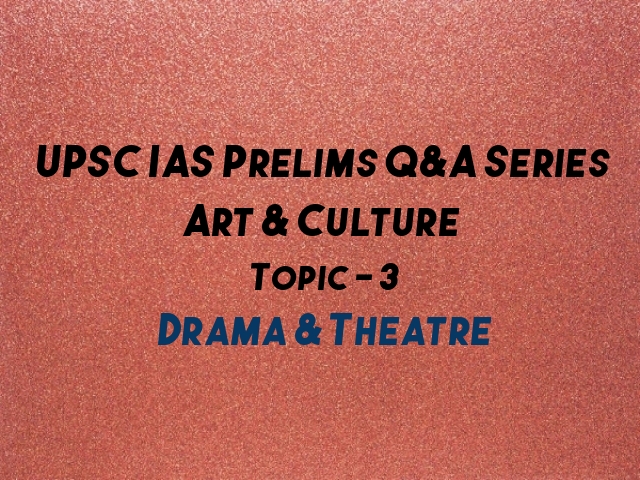 Traditional Theatre forms and Puppetry has been a key part of the Indian culture for ages. Performed in different states under different names, costumes, and styles, the drama has been an important source of entertainment as well as a celebration for the people in Ancient and Medieval India. Even today, many of these art forms are still performed at various festivals in many states. Aspirants need to study the theatre forms, their origin, costumes, performance, actors, and other important facts related to each. To help aspirants prepare, we have compiled a list of 10 important questions on the Theatre & Drama performed in various parts of India.

Ques 2: Match the following theatre forms with their state of origin:

Ques 4: Which of the following dramas are not performed in Kerala?

Ques 5: Which of the following caves is the most ancient evidence of theatre?

Ques 6:  Who among the following was started the theatre culture in Odisha?

Ques 7: Which of the following theatre art is also known as “proscenium theatre”?

Ques 8: Consider the following statements with reference to Puppet Theatre:

Ques 9: Which of the following is not types of Natyamandap according to the Bharata Muni?

Ques 10: “Doha, Chaubola, Chhappai, Behar-e-tabeel” are verse meters used in which of the following theatre forms: