UPSC: Check important questions with explained answers based on the Union budget and economic survey that can be useful in the UPSC Civil Services Prelims 2020 preparation.

UPSC: Union Budget and Economic Survey are the most comprehensive reports of the Government’s finances in which revenues from all sources and outlays for all activities are consolidated as well as action plans for the next years are mentioned. It is important for an IAS aspirant to be abreast of every important detail mentioned in these two reports. Questions can be expected from these reports in the UPSC Civil Services Prelims exam 2020. In this article, we have provided questions with explained answers that will help the aspirant to analyze the type of questions that can be asked from these reports.

Important Questions for Prelims 2020 based on Budget and Economic Survey

Ques 1: Consider the following statements about the “Ease of Living Index”:

Explanation: The Ministry of Housing and Urban Affairs unveiled the “Ease of Living Index (EoLI)” 2019 and the municipal performance index to help assess the progress made in cities and empower them to use evidence to plan, implement and monitor their development.

Both these indices are designed to assess the quality of life of citizens in 100 smart cities and 14 million-plus cities. The index is an initiative to assess the liveability of cities as compared to global and national benchmarks. The EoLI 2019 will assess three pillars: quality of life, economic ability, and sustainability, which are further divided into 14 categories across 50 indicators.

Explanation: In her Budget speech, Union Finance Minister Nirmala Sitharaman announced that the government will launch a ‘Village Storage Scheme’. This, she said, will be run by women’s self-help groups.

The scheme aims to provide holding capacity for farmers and through this, women in villages and the rural part of the country will be able to retain their status as “Dhaanya Lakshmi” (one of the eight forms of Hindu deity Lakshmi, the goddess of wealth). It will also help to reduce their logistics costs and increase their income. 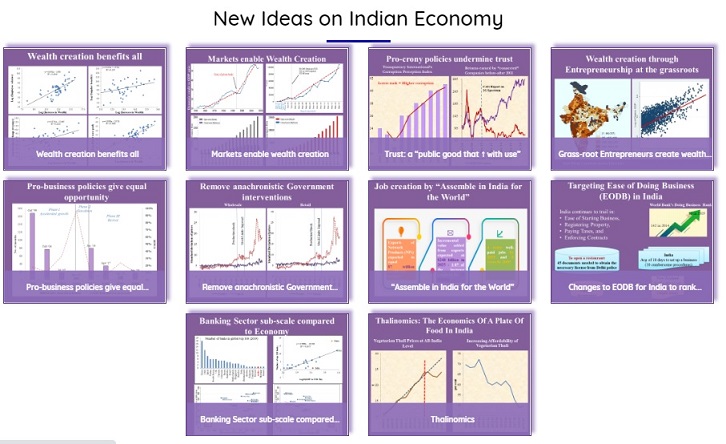 Ques 4: What is India’s rank in the creation of New Firms? 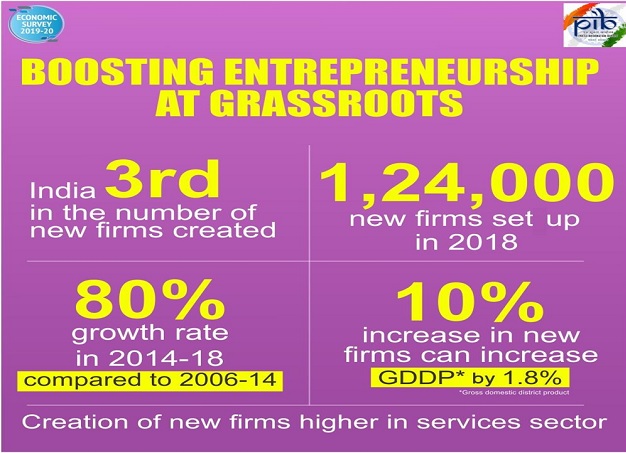 Ques 5: Consider the following statements about the ” Warehousing Development and Regulatory Authority (WDRA)”:

It is a Statutory Authority under the Department of Food and Public Distribution, Government of India. The Authority has its Headquarters in New Delhi.

Explanation:‘TB Harega Desh Jeetega’ is a nationwide campaign to spread disease awareness about TB and encourage people with TB symptoms to seek medical attention and remain adherent to treatment.

It has been launched with an aim to eliminate tuberculosis from India by 2025. The government will ensure that all patients, at private or public hospitals, receive free-of-cost and high-quality TB care. There are three pillars of this campaign – clinical approach, public health component, and active community participation.

Ques 7: The ‘Invisible Hand’ that Economic Survey 2019-20 mention, has been taken from?

Explanation: Introduced by Adam Smith in his book  ‘The Wealth of Nations’

The unobservable market force that helps the demand and supply of goods in a free market to reach equilibrium automatically is the invisible hand.

Ques 8: Which department of Finance ministry releases the Economic Survey?

Ques 9: Consider the following pairs of the initiatives declared in the Union Budget 2020-21 and the respective organisation implementing them:

Which of the above pairs is/are correct?

Explanation: “Kisan Rail” is proposed to be set up by Indian Railways through PublicPrivate Partnership (PPP) to build a seamless national cold supply chain for perishables (milk, meat, fish, etc.). Under these initiatives, Express and Freight trains to have refrigerated coaches.

“Krishi Udaan” will be launched by the Ministry of Civil Aviation under which both international and national routes will be covered. North-East and tribal districts are expected to realize the Improved value of agri-products by the implementation of this scheme.

Ques 10: Who among the following is/are the main beneficiaries under the Deen Dayal Upadhyay Antyodaya Yojana(DAY)?

Select the correct answer using the codes given below.

Explanation: Deen Dayal Antyodaya Yojana (DAY) to uplift the urban poor folks by enhancing sustainable livelihood opportunities through skill development. Keeping in view the objective of Make in India, Skill Development is essential for socio-economic betterment. Deen Dayal Antyodaya Yojana was launched under the Ministry of Housing and Urban Poverty Alleviation (HUPA). The government of India has provisioned Rs.500 crore for the scheme.

National Urban Livelihoods Mission (NULM) is renamed as Deen Dayal Antyodaya Yojana- (DAY-NULM) and in Hindi as – Rashtriya Shahri Aajeevika Mission. Under the scheme urban areas extends the coverage to all the 4041 statutory cities and towns, thereby covering almost the entire urban population. Currently, all the urban poverty alleviating programmes covered only 790 towns and cities.