In this article, get 10 most important questions on the Money & Banking topic of Indian Economy Aspirants of UPSC Civil Services Prelims 2021 exams can solve these questions to test their knowledge on this topic of Economics. 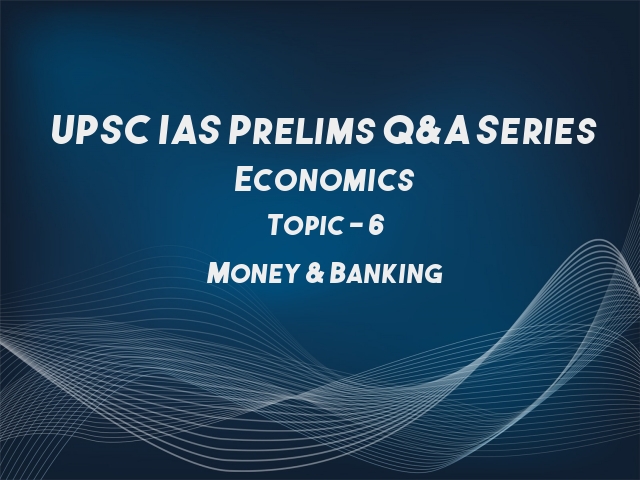 Money may be defined as anything which is generally accepted as a medium of exchange and at the same time acts as a measure, store of value and standard of deferred payment. Commercial Banks are a financial institution who accepts deposits from the public and provide loans facilities for investment with the aim of earning profit. They are regulated by a Central Bank also known as the Reserve Bank of India. Money and banking are the basic tools of any economy. To help the aspirants in their preparation, we have provided the 10 most important questions from the Money & Banking of Indian Economy topic of Economics for UPSC Prelims 2021.

Ques 1: When the cash reserve ratio (CRR) is increased by the RBI, it will:

(a) Increase the supply of money in the economy

(b) Decrease the supply of money in the economy

(c) No impact on the supply of money in the economy

(d) Initially increase the supply but later on decrease automatically.

(a) Sale of agricultural products in the government regulated Mandis.

(b) Sale and purchase of bonds and securities to the commercial banks by the RBI.

(c) Sale and purchase of bonds and securities by the RBI to the government.

(d) Sale and purchase of bonds and securities by the commercial banks to the customers.

Ques 3: Which of the following is not the monetary tool?

Ques 4: Consider the following statements regarding the National Payments Corporation of India (NPCI):

Ques 5: Consider the following statements regarding the EASE 2.0 Index:

Ques 6: Which of the following is/are the potential impact(s) of sale of Government securities by the Reserve Bank of India?

Select the correct answer using the code given below:

Ques 7: The Committee on Financial Sector Reforms was headed by:

Ques 8: What is the mandate of the KV Kamath Committee formed by the Reserve Bank of India?

(a) Financial parameters for restructuring of loans

Ques 9: Which of the following markets are independently regulated by Forward Market Commission?

Ques 10: Which one of the following is not a feature of "Value Added Tax"?

(a) It is multi-point destination-based system of taxation.

(b) It is a tax levied on value addition at each stage of transaction in the production distribution chain.

(c) It is a tax on the final consumption of goods or services and must ultimately be borne by the consumer.

(d) It is basically a subject of the central government and the state governments are only a facilitator for its successful implementation.