Articles 352-360 of the Indian Constitution deals with Emergency provisions. Aspirants of the UPSC IAS Prelims 2021 exam can check below 10 important questions on the Emergency Provision topic of Indian Polity. 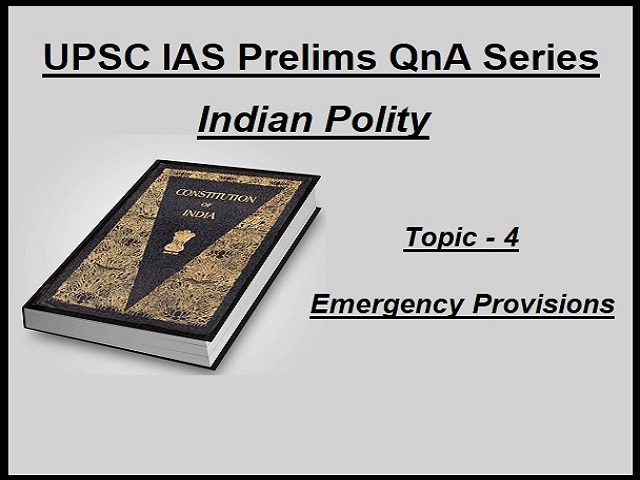 UPSC IAS Exam 2021: UPSC Civil Service Prelims 2021 exam is scheduled for June 27. To help the aspirants in their preparation and revision, we have provided 10 questions based on (Emergency Provisions topic of the Indian Polity syllabus. All questions have been created as per the latest UPSC Prelims pattern. Questions are accompanied by the correct answer and an attached explanation for better understanding. Aspirants can solve these topic-wise important questions to test their preparation level.

The emergency provisions are contained in Part XVIII of the Constitution of India, from Article 352 to 360. These provisions enable the Central government to meet any abnormal situation effectively. The rationality behind the incorporation is to safeguard the sovereignty, unity, integrity, and security of the country, the democratic political system, and the Constitution.

Which of the given statements are correct about different kinds of Emergency provisions in the Indian Constitution?

Which of the given statement/s are correct?

Ques 3: Which of the following Amendment Acts made provision of judicial review against the presidential proclamation imposing President’s Rule under Article 356?

Ques 4: To date how many times the Financial Emergency has been proclaimed in India?

Ques 5: Which of the following is not correctly matched?

a) Article 352 - Proclamation of Emergency

Which of the given statements in not correct?

Ques 8: In which of the following amendment of the Indian Constitution introduced a new provision to put a restraint on the power of Parliament to extend a proclamation of President’s Rule beyond one year?

Ques 9: Which part of the Indian Constitution deals with emergency provisions?

Ques 10: Which of the following is true with respect to Article 358 of the Indian Constitution?