Indian Constitution included many commissions like CAG, UPSC, SPSC, SG, etc. The institutions hold some special importance and should be thoroughly studied for the UPSC Prelims exam. Aspirants of the UPSC IAS Prelims 2021 exam can check below 10 important questions on this topic. 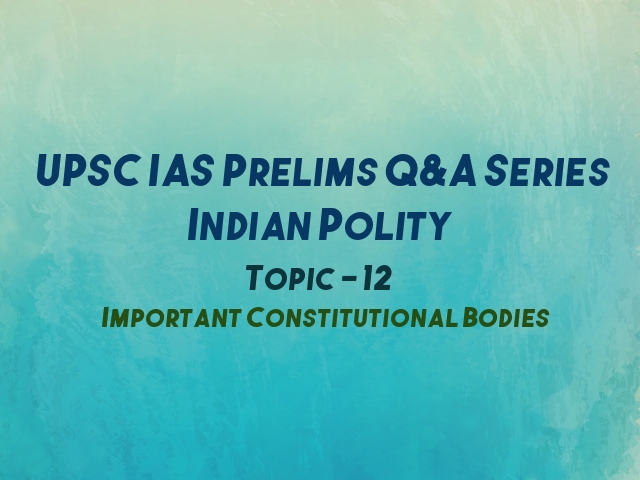 Commissions are different from the legislature or the constituent assembly in at least three ways: function (they do not make final decisions on the constitution, being advisory), qualifications, size, and other dynamics. UPSC, SPSC< CAG< NHRC, AG are some of the important commissions mentioned in the Indian Constitution. To help the aspirants in their preparation and revision of these topics, we have provided 10 questions based on (Emergency Provisions topic of the Indian Polity syllabus. All questions have been created as per the latest UPSC Prelims pattern. Questions are accompanied by the correct answer and an attached explanation for better understanding. Aspirants can solve these topic-wise important questions to test their preparation level.

Ques 1: Currently, the Comptroller and Auditor General of India is entrusted with which of the following responsibilities?

Ques 2: Consider the following statements with respect to Attorney General of India

He is not a member of Central Cabinet

Ques 3: Which of the following bodies investigate all matters  relating  to  the constitutional and other  legal  safeguards for  the  Anglo-Indian  Community  and  report  to  the  President upon their working?

(a) National Commission for Minorities

(b) National Commission for SCs

Ques 4: Who among the following will represent  the  Government of  India in  any reference  made by the president to the Supreme Court under Article 143 of the Constitution?

(b) Chairman of Law Commission

Ques 7: With reference to the  Finance  Commission of  India,  which of the following statements is/are incorrect?

Ques 8: Consider the following statements with reference to the Comptroller and Auditor General of India:

Ques 9: Who bears the salary, pension and allowances of the chairman and members of the Union Public Service Commission?

(a) Consolidated fund of India

(b) Contingency fund of India

Ques 10: Which among the following bodies do not have the powers of Civil Court as part of their duties?

(a) National Commission for SCs

(b) National Commission for STs

(d) None of the Above