Aspirants of the UPSC IAS Prelims 2021 exam can check below 10 important questions on the appointment, powers, and impeachment of the President, Vice President, and Governor topics of Indian Polity. 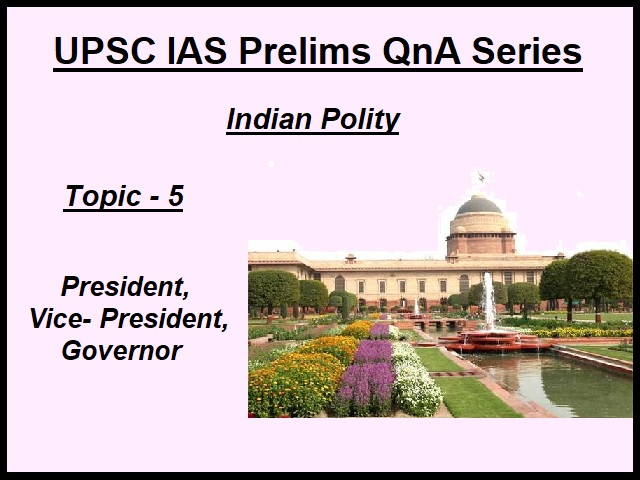 UPSC IAS Exam 2021: The appointment, powers, and impeachment of the President, Vice President, and Governor are some of the most important topics of the UPSC Polity syllabus. Every year one to two questions are asked from one of these topics in the Prelims exam. Aspirants preparing for the coveted civil services exams must thoroughly study and revise these topics to score well in Prelims as well as in Mains GS 2 paper.

To help the aspirants in their preparation and revision, we have provided 10 questions based on the latest UPSC Prelims pattern. These questions have been framed by the subject expert on the three most important topics of Indian Polity.

Topic 1 - Constitution of India and Its Framework

1) The Oath of office to the President is administered by the senior-most judge of the Supreme Court.

2) In an emergency, the President’s emoluments and allowances can be diminished during his term of office.

3) The President can resign from his office at any time by addressing the resignation letter to the Chief Justice of India.

Select the incorrect answer from the code given below.

Ques 2:  In case of impeachment of the President for violation of the Constitution of India, which of the following is not correct?

a) Any one of both houses of the parliament can charge sheet.

b) Resolution of the proposal to charge sheet should be signed by a minimum of one-fourth of the total members of the house.

c) Such a resolution should be produced after 10 days of issuing of written notice to the President.

d) Such resolution must be passed by a minimum of two-third majority of the total members.

Ques 3:  Which of the following is not related to the powers of the Governor?

d) Power to grant reprieves, respites, or remission of punishments

Which of the statements given above are correct?

Ques 5: Which of the following statements is/are correct with regard to the Vice-President of India?

Select the correct answer using the codes given below:

Ques 6: Which of the following are the discretionary powers given to the Governor of a State?

Ques 7: Which of the following Vice President was elected unopposed?

Ques 8: In a case, if the same person is appointed as the governor of two or more states, the emoluments and allowances payable to him will bear by:

a. One of the two states decided by President

b. The first state in which he was appointed

c. Both the states shared by in such proportion as determined by the President of India.

d. The second state in which he has been appointed

Ques 9:  In case of death of a sitting governor, who among the following will discharge the functions of the governor of that state?

a) The President of India

b) The Chief Justice of the Supreme Court

c) The Chief Justice of the concerned state high court

Ques 10:  Which of the following is not matched?