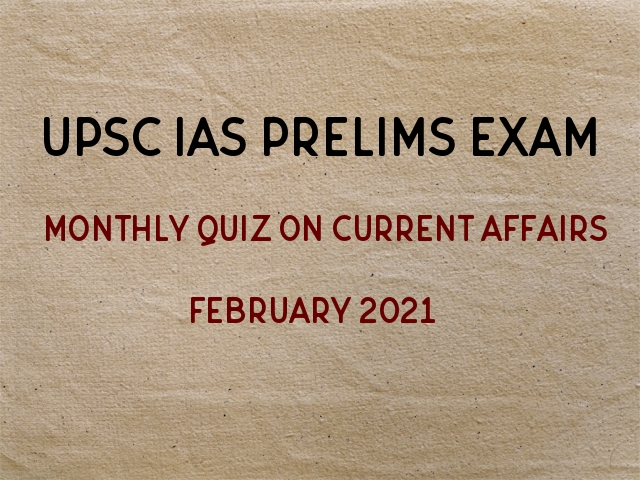 The General Studies Paper 1 tests candidates’ knowledge of History, Geography, Polity, Economy, Environment, General Science and Current Events. As per UPSC IAS Previous Years' Paper of the past two years, the current affairs section forms the major part of General Studies Paper 1. Going by this trend, it is highly expected that this year as well, the IAS Prelims GS Paper I might ask questions on current events of past one year. Considering this, we have compiled below the important current affairs questions. Go through the questions and answers and test your knowledge of the current happenings of February 2021.

Ques 1: Which of the following institutions issued “Green Bonds” for the first time?

Ques 2: Regarding the smellicopter choose the correct statement

Ques 3: The recently launched MITRA Scheme is related to which of the following?

Ques 4: The Chauri Chaura incident was related to which of the following national movements?

Ques 5: The “Ageing water infrastructure: An emerging global risk” report is released by?

Ques 6: Which campaign has been launched on the birth anniversary of APJ Abdul Kalam for IPR awareness?

Ques 8: Which of the following rivers are associated with Dhubri Phulbari bridge?

Ques 9: Which of the following Power projects has been affected by Chamoli flash floods?

Ques 14: Which of the following would be the nodal agency dealing with complaints against unsolicited commercial communication?

(b) Telecom Regulatory Authority of India

Ques 15: E-Yuva scheme is being implemented by?

We sincerely hope that the given questions helped you in your preparation. You can also refer to below links for more study material and quizzes.