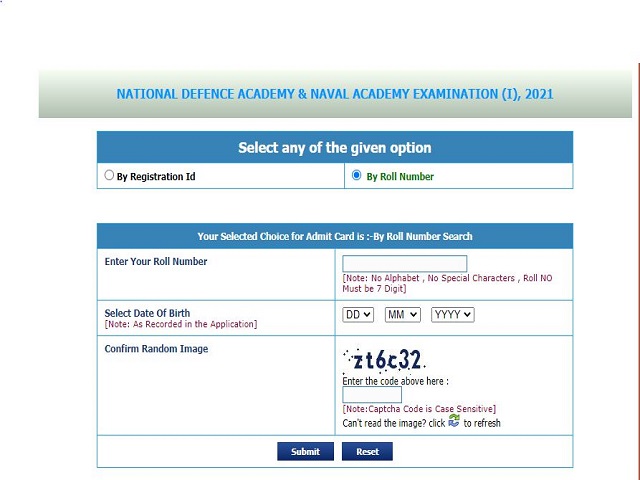 UPSC NDA Admit Card Link is given below. The candidates can download UPSC NDA NA Admit Card, directly, through the link below:

UPSC is conducting the written test for National Defence Academy & Naval Academy Examination (I) and (II), 2021 on 18 April 2021 (Sunday).

The candidates should carry their UPSC NDA 1 Admit Card along with the (original) Photo Identity Card, whose number is mentioned in the e-Admit Card , in each session to secure admission to Examination Hall. E-Admit Card must be preserved till the declaration of the final result as its production before Service Selection Board is necessary. Also, candidates whose photo is not clear on the e-Admit Card will have to bring a photo identity certificate and two passport size photographs for one session each for appearing in the examination after giving the address.

There will Negative Marking for wrong answers marked

The result will be published on the official website of UPSC. Selectd candidates required shall be required ro register themselves online on Directorate General of Recruiting website www.joinindianarmy.nic.in.

UPSC NDA NA Notification was published on 30 December 2020 for filling up 400 vacancies in Army, Navy and Air Force Wings of NDA for 147th Course and for 109th Indian Naval Academy Course (INAC) commencing for 02 January 2022.

UPSC NDA Exam is scheduled on 18 April. As per UPSC NDA Notification, UPSC NDA Admit Card Download will be available 3 weeks before the exam

What is UPSC NDA Exam Date ?

Is there any negative marking in UPSC Exam 2021 ?

What should I carry with UPSC NDA 1 Admit Card ?

One photo identity card (original), whose number is mentioned in the e-Admit Card, in each session.

I am not able to Download UPSC NDA Admit Card 2021

In case of any problem in downloading e-admit card for the National Defence Academy & Naval Academy Examination (I), 2021 or discrepancy noticed in the e-admit card , please contact on e-mail: - usnda-upsc@nic.in
Comment ()