The Madhukranti Portal has been developed for online registration to achieve the traceability source of honey as well as other beehive products on the digital platform. 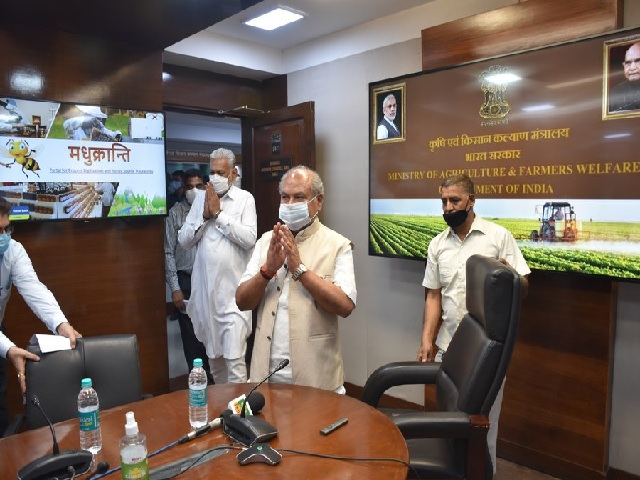 The Agriculture Minister Narendra Singh Tomar on April 7, 2021, launched Madhukranti Portal and NAFED’s Honey Corners to promote the honey mission in the country.

According to the official statement, the Madhukranti Portal is an initiative of the National Bee Board under the National Beekeeping and Honey Mission. While the Honey Corners of NAFED- National Agricultural Cooperative Marketing Federation are specially spaces for the sale of honey.

Indian Bank is the technical and banking partner for the development of the digital platform. A Memorandum of Understanding between the National Bee Board and Indian Bank was also signed for this project.

The Madhukranti Portal has been developed for online registration to achieve the traceability source of honey as well as other beehive products on the digital platform. It will also help in checking the quality and the source of adulteration of honey.

What will be the significance?

While addressing the launching ceremony, the Union Minister stated that the honey mission will help in increasing the income of the farmers, boost exports and employment generation.

He added that the ‘Sweet Revolution’ must be spread all over the country and that the Indian honey must meet the global standards.

Necessary functionalities are also being developed on the Madhukranti portal in order to create a database of all the stakeholders who are involved in honey as well as other hive production, marketing chains, and sales.

Launch of Online Registration of beekeepers:

The Online Registration of the Beekeepers was also launched on April 7 in the first phase. It was then followed by the registration done by other stakeholders in this trade.

All the sales transactions in honey trading in India ill be captured through a mobile app in the second phase in order to achieve desired results in the area of source traceability.

• NAFED, for the marketing support to the Farmer Producer Organisations, has developed 14-15 Honey Corners. One each in 5 NAFED bazaars.

• More Honey Corners will also be developed by the Federation in most of the upcoming major 200 NAFED stores that will promote market support for honey.

• Online Marketing options will also be explored to provide a platform for the promotion and the marketing of honey supplied by FPOs.

The National Beekeeping and Honey Mission- NBHM Scheme is a Central Sector scheme that was approved by the government for Rs. 500 crores allotted under the Atmanirbhar Bharat Initiative.

The government has also been making efforts to address the issues related to the quality of honeybees setting up the quality testing labs. It has also developed a system for a traceability system for the source of honey and other beehive products under the NBHM Scheme.