Speaking after her win, "It took me a long time to verbalize the fact that I wanted to dare to dream it." She continued by saying,  "Being able to live out my dream right now, with everyone here, has made it better than I ever could have imagined."

The 25-year-old was the favourite to lift the cup right from the start of the final game. It was clear from the opening minutes of the match itself that her win would be inevitable. In just 11 minutes, she already held a 4-0 lead over 29-year-old Pliskova.

The Wimbledon Champion Ashleigh Barty received her Wimbledon women's singles trophy from the Duchess of Cambridge, who is the Royal Patron of the All England Lawn Tennis and Croquet Club (AELTC). 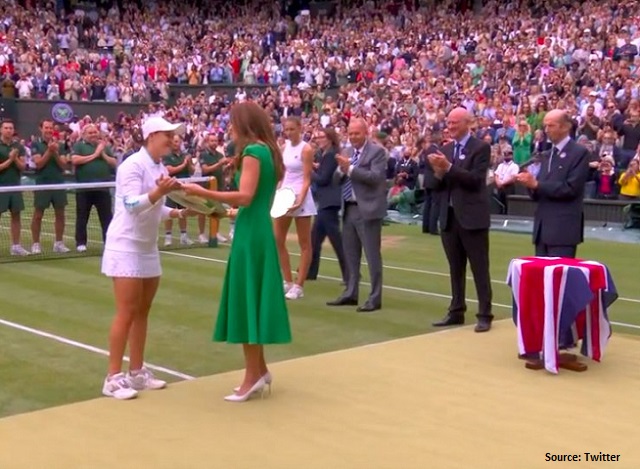 • Ashleigh Barty has become the 3rd Australian woman in the Open Era to win the Wimbledon singles title, after Margaret Court and Evonne Goolagong.

• Overall, this is her 2nd major title and 4th title of the season.

• She is currently ranked no. 1 in the world in women's singles by the Women's Tennis Association (WTA).

• She is the second Australian singles No. 1 after Evonne Goolagong.

• She has also featured among the top 10 players in doubles with her career-high ranking being world no.5.

• Barty began playing tennis at the age of four and had a promising junior career, reaching a career-high ranking of world No. 2 after winning the girls' singles title at Wimbledon in 2011.

• She also finished as the runner-up in three Grand Slam doubles events with veteran Casey Dellacqua, including at the Australian Open when she was only 16 years old.

• In 2014, Barty decided to take an indefinite break from her tennis career.

• She ended up playing cricket during this time, joining the Brisbane Heat for the inaugural Women's Big Bash League (WBBL) in 2015 despite having no formal training in the sport.

• However, she returned to tennis in 2016 and had a breakout year in singles in 2017, as she won her first WTA title at the Malaysian Open and rose to world no. 17 rank despite having never been ranked inside the top 100 before her time off.

• Barty then won her first Premier Mandatory and Grand Slam tournament titles in doubles in 2018 along with Casey Dellacqua before accomplishing the same feat in singles in 2019.