Former Zimbabwe captain Heath Streak was banned from all forms of cricket for eight years on April 14, 2021 after he accepted five charges of breaching the ICC Anti-Corruption Code. 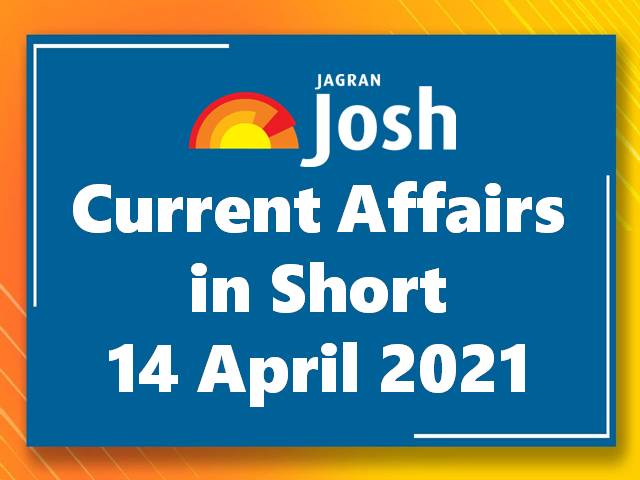 Egypt seizes Ever Given after it blocked Suez Canal

•The Egyptian authorities have seized the massive ship Ever Given, which had blocked the Suez Canal for almost a week.
•The 200,000-tonne MV Ever Given had gotten diagonally stuck in the narrow Suez Canal, which is a crucial global trade artery, on March 23.
•This had triggered almost a six-day long delay, during which the Egyptian personnel worked day and night to dislodge the ship using towboats.
•The massive cargo vessel that blocked the Suez Canal last month amid a financial dispute with its owner, the canal chief and a judicial official said Tuesday.
•The mega-ship has been "seized" on court orders until the vessel's owners pay $900 million.

•Moderna announced on April 13, 2021 informed that its vaccine is 90 percent effective six months after the second dose is administered.
•The company in a statement said that new results from a preclinical study of the Company's COVID-19 variant-specific vaccine candidates showed that its variant-specific booster vaccine candidates (mRNA-1273.351 and mRNA-1273.211) increase neutralizing titers against SARS-CoV-2 variants of concern.

•The Delhi International Airport Limited (DIAL) has introduced a "Luminometer" to detect the virus load on surface areas.
•The Airport CEO stated that air traveling is the safest mode of traveling and looking at the rising number of cases we have introduced new technology to arrest the spread of the infection.
•Luminometer will be able to show how infected the surfaces are. As per reports, the new variant of the virus is airborne.

•Former Zimbabwe captain Heath Streak was banned from all forms of cricket for eight years on April 14, 2021 after he accepted five charges of breaching the ICC Anti-Corruption Code.
•The former cricketer was charged as a participant under the Code by virtue of his status as the coach of Zimbabwe from 2016 to 2018 and coach of various domestic teams.
•The charges include disclosing inside information under both the ICC Code and various domestic Codes, in circumstances where he knew or should have known that such information may be used for betting purposes.
•It also includes directly or indirectly soliciting, inducing, enticing, persuading, encouraging, or intentionally facilitating any participant to breach the Code.

•Uttar Pradesh chief minister Yogi Adityanath tested positive for Covid-19 on April 14, 2021.
•The Chief Minister had isolated himself on April 13, 2021 after three members in his team had tested positive for coronavirus over the past few days.
•He said that he is carrying out all his work virtually and the state activities are going on as usual.