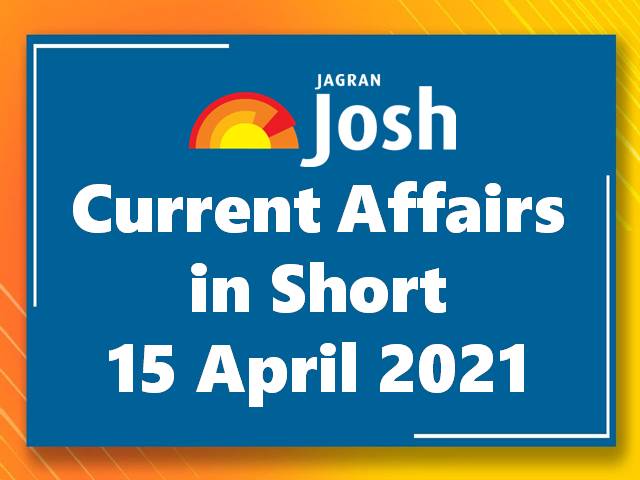 •Japan's ruling Liberal Democratic Party Secretary-General Toshihiro Nikai said on April 15, 2021 that cancelling this summer's Tokyo Olympics may be an option if the spread of COVID-19 forces organisers to think it would be difficult to hold the event.
•Toshihiro Nikai, who is second in command in Japan PM Yoshihide Suga's ruling party, made the remark during a TV program.
•He said that if it turns out that holding the Olympics is practically impossible, we will have nothing but to give up the idea.
•The Tokyo Olympic Games, which were initially scheduled to be held in 2020, were postponed to July-August 2021 due to the pandemic.
•Though the authorities have been confident of holding the Olympic games this year, the current rise in coronavirus infections across the world have raised fresh concerns.

Journalists should be treated as frontline workers and given COVID-19 vaccination: Delhi CM

•Delhi Chief Minister Arvind Kejriwal informed on April 14, 2021 that the state will write to the centre requesting inclusion of journalists into the category of frontline workers. He stated that they report from "adverse" situations.
•The Chief Minister tweeted saying that journalists should be treated as frontline workers and should be given vaccine on priority.
•He emphasised that Journalists are reporting from most adverse situations.

•The number of cremations in Delhi's biggest crematorium, Nigambodh Ghat, has gone up by at least 30 percent.
•Delhi's largest Muslim cemetery is also running out of space for the burial of Coronavirus victims. The burial ground, the oldest in the national capital, is spread over an area spanning acres of land.
•Reportedly, 25 bodies were brought for burial at the graveyard, which was the highest so far this year.
•The National Capital reported 104 deaths on April 14, 2021 itself.

•Kerala Chief Minister Pinarayi Vijayan tested negative for COVID-19 and was discharged from the hospital on April 14, 2021.
•He had tested positive for COVID-19 on April 8 and was admitted to the Government Medical College at Kozhikode on the advice of doctors.
•After 7 days, he tested negative and was discharged. The Chief Minister had taken the first shot of the COVID-19 vaccine on March 3rd.