The first batch of Russia's COVID-19 vaccine, Sputnik V will be delivered to India in April, informed Indian Ambassador to Russia, Bala Venkatesh Varma on April 15, 2021. 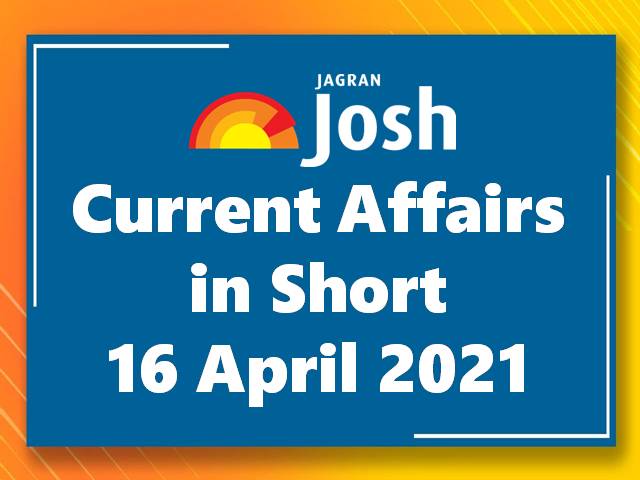 •Lok Sabha Speaker Om Birla is scheduled to chair a virtual meeting of the presiding officers of the legislative bodies in the country and other leaders on April 19, 2021 on the 'prevailing COVID-19 situation and the role and responsibility of public representatives'.
•The meeting is expected to be attended by Union Minister of Parliamentary Affairs Pralhad Joshi, other leaders of Opposition, presiding officers of state legislatures and chief whips.
•India reported its highest-ever single-day spike of COVID-19 cases with around 2.16 lakh new infections and 1182 deaths reported in the last 24 hours.

•The Delhi High Court on April 15, 2021 allowed a maximum of 50 people to offer prayers at Nizamuddin Markaz mosque five times a day during the holy month of Ramadan.
•The mosque had been closed for devotees following the Tablighi Jamaat congregation in March 2020.
•The permission was given by a single-judge bench of Justice Mukta Gupta who relied upon Delhi Disaster Management Authority (DDMA)'s June 2020 guidelines that permitted the opening of places of worship and religious places.

•Around 2167 people have tested positive for COVID-19 in the last five days in Haridwar, the host city of the month-long Kumbh Mela that is being attended by lakhs of people.
•As per official data, 254 COVID-19 positive cases were reported on April 10, 386 on April 11, 408 on April 12, 594 on April 13 and 525 on April 14.
•Despite an alarming surge in the number of coronavirus infections in the country, the Kumbh Mela is expected to continue till April 30.
•The Kumbh Mela was originally supposed to begin in January but looking at the COVID-19 situation, the state government decided to start it in April.
•However, in the present situation when India's daily spike is crossing 2 lakh infections, questions are being raised over the decision to continue with the Kumbh Mela, as ensuring social distancing there is extremely difficult.

•The first batch of Russia's COVID-19 vaccine, Sputnik V will be delivered to India in April, informed Indian Ambassador to Russia, Bala Venkatesh Varma on April 15, 2021.
•The shipment is expected to take place by the end of this month and the production will be launched in May and it will slowly be increased.
•According to Bala Venkatesh Varma, the volume of vaccine production in India will be gradually increased and may exceed 50 million doses per month.

•The head of Pfizer, Albert Bourla said in an interview recently that people will "likely" need a third dose of his company's Covid-19 shot between six to 12 months of vaccination.
•He also stated that annual vaccinations against the coronavirus may well be required.
•He continued by saying that all this, however, needs to be confirmed. He also added that variants will play a "key role."

•Ranjit Sinha, a former chief of Central Bureau of Investigation passed away on April 16, 2021. He was 68 and had tested positive for COVID-19 one day earlier.
•Sinha was a 1974 batch Bihar cadre IPS (Indian Police Service) officer. He had headed the Indo-Tibetan Border Police (ITBP) force and the Railway Protection Force.
•He had served at various senior positions in the Central Bureau of Investigation in Patna and Delhi before being appointed as CBI chief in 2012.
•He had been the CBI Chief in 2013, when the Supreme Court had famously described the CBI as a "caged parrot that speaks in its master's voice".