The day’s updated quizzes cover topics such as India's economic growth in FY 20-21, first human case of H10N3 Bird Flu and new names of  COVID-19 variants first found in India among others. 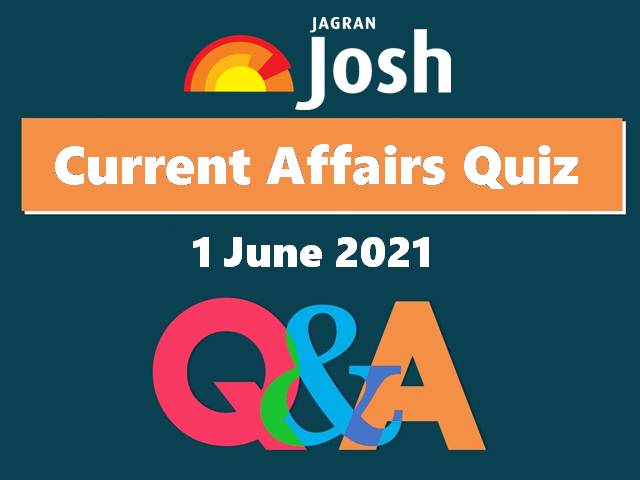 1 June 2021: The Current Affairs Quizzes section of Jagranjosh aims to help every competitive exam aspirant to revise the day at ease. The day’s updated quizzes cover topics such as India's economic growth in FY 20-21, first human case of H10N3 Bird Flu and new names of  COVID-19 variants first found in India among others.

1. According to the Statistics Ministry, the Indian economy contracted by how much percent in the Fiscal Year 2020-21?

2. WHO has given what names to the COVID-19 variants first found in India?

a) Kappa and Delta

b) Alpha and Beta

3. What is the new name of the COVID-19 variant that was first discovered in the United Kingdom?

4. The world's first human case of H10N3 Bird Flu has been reported in which nation?

5. When is World Milk Day observed?

6. Uttar Pradesh has announced how much financial aid for the family of journalists who died of Covid-19?

d) None of the Above

8. Who among the following has withdrawn herself from the French Open?

1. (b) 7.3 percent
The Indian economy contracted by 7.3 percent in Financial Year 2020-21, as per official data released by the Statistics Ministry on May 31, 2021, recording its worst recession since independence.

2. (a) Kappa and Delta
The B.1.617.1 and B.1.617.2 COVID-19 variants that were first identified in India, have been named as ‘Kappa’ and ‘Delta’ respectively by the World Health Organisation. The naming has been done to simplify the public discussion about the variants.

4. (a) China
China has reported the world's first known human case of the H10N3 strain of bird flu. A 41-year-old man in China's eastern Jiangsu province has been confirmed to have been infected with the bird flu strain, as per a statement by China's National Health Commission on June 1, 2021.

5. (c) June 1st
World Milk Day is observed every year on June 1st to raise awareness regarding the importance of milk as a highly nutritious global food item and to celebrate the dairy sector.

6. (a) Rs 10 lakh
Uttar Pradesh Chief Minister Yogi Adityanath on May 30, 2021 released Rs 10 lakh aid for the family of journalists who succumbed to Covid-19. The Information Department of the state has gathered the details of the deceased journalists and the financial assistance has been released to their families.

7. (b) Silver
Indian boxer Mary Kom finished her campaign at the 2021 ASBC Asian Boxing Championships with silver after going down against the two-time world champion Nazym Kyzaibay in a high-octane 51kg final in Dubai on May 30, 2021.

8. (c) Naomi Osaka
World no. 2, Naomi Osaka has decided to withdraw herself from French Open Tournament following media boycott fallout. The Japanese Tennis Player made the announcement on May 31, 2021. This came amidst the ongoing controversy regarding her decision of boycotting press conferences at the ongoing French Open.