The day’s updated quizzes cover topics such as BAFTA Awards 2021, lockdown and third vaccine given emergency use approval in India among others. 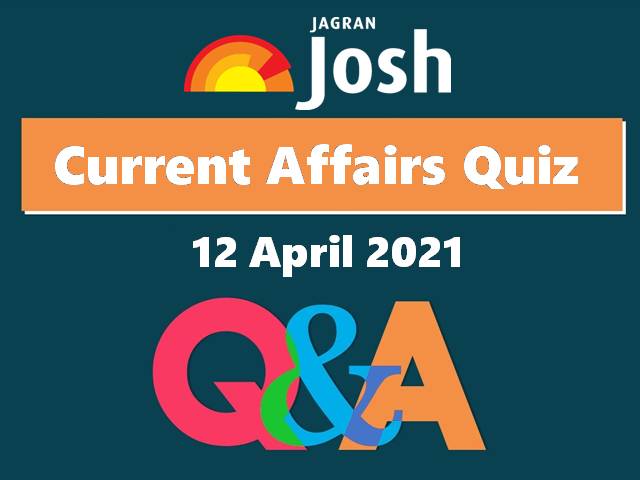 12 April 2021: The Current Affairs Quizzes section of Jagranjosh aims to help every competitive exam aspirant to revise the day at ease. The day’s updated quizzes cover topics such as BAFTA Awards 2021, lockdown and third vaccine given emergency use approval in India among others.

1. Which nation has become the second worst hit by COVID-19 in the world?
a) Russia
b) France
c) UK
d) India

2. Which has become the third COVID-19 vaccine to receive emergency use approval in India?
a) Sputnik V
b) Johnson & Johnson vaccine
c) Moderna
d) Pfizer

3. The Indian government on April 11 restricted the export of which medical drug till COVID-19 situation improves in the country?
a) Dexamethasone
b) Paracetamol
c) Remdesivir
d) Hydroxychloroquine

4. Which Indian state has imposed a lockdown in 17 of its districts?
a) Karnataka
b) Andhra Pradesh
c) Jharkhand
d) Chattisgarh

5. Ouhoumoudou Mahamadou has been appointed as the Prime Minister of which African nation?
a) Niger
b) Algeria
c) Mali
d) Chad

6. Which film won the Best Film award at the British Academy Film Awards- BAFTA 2021?
a) The Father
b) Nomadland
c) The Trial of the Chicago 7
d) Promising Young Woman

1. (d) India
India on April 12, 2021 became the second-worst hit nation in the world by the COVID-19 pandemic, surpassing Brazil. India with a tally of 1.35 crore coronavirus cases now only stands behind the United States that has the highest number of COVID-19 cases in the world.

2. (a) Sputnik V
India's Subject Expert Committee has approved Dr. Reddy's application for emergency use authorisation to Russia's Sputnik V COVID-19 vaccine. This is the third vaccine to receive emergency use approval in India after the two locally manufactured vaccines- Bharat Biotech's Covaxin and Oxford-Astrazeneca's Covishield.

3. (c) Remdesivir
The Central Government on April 11, 2021, prohibited the exports of injections Remdesivir and Remdesivir Active Pharmaceuticals Ingredients- API. The prohibition will be till the Coronavirus situation in India improves.

4. (d) Chattisgarh
Chhattisgarh Government has issued orders to impose complete lockdown in 17 districts by the respective administrations. The step has been taken in view of the rising Coronavirus cases in the state.

6. (b) Nomadland
Nomadland won the award in 'Best Film' category at the British Academy Film Awards- BAFTA 2021. The other nominees includes- The Father, The Mauritanian, Promising Young Woman and The Trial of the Chicago 7.

7. (a) Sir Anthony Hopkins
Sir Anthony Hopkins won the Best Actor honour for his role in the film 'The Father' at the British Academy Film Awards- BAFTA 2021. The other nominees of the award included a diverse pool of tremendous actors such as Chadwick Boseman, Tahar Rahim. Riz Ahmed, Mads Mikkelsen and Adarsh Gourav from 'The White Tiger'.