The day’s updated quizzes cover topics such as new Ecuador President, Moderna vaccine efficacy and complete curfew among others. 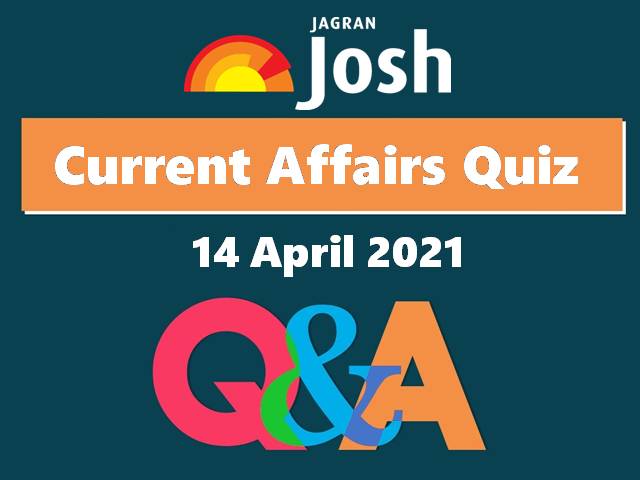 14 April 2021: The Current Affairs Quizzes section of Jagranjosh aims to help every competitive exam aspirant to revise the day at ease. The day’s updated quizzes cover topics such as new Ecuador President, Moderna vaccine efficacy and complete curfew among others.

1. The United States has paused which vaccine over blood clot concerns?
a) Johnson & Johnson
b) Pfizer
c) Moderna
d) None of the Above

2. Which nation has seized Ever Given after it blocked Suez Canal?
a) Tanzania
b) Egypt
c) Jordan
d) Oman

3. Which among the following vaccine is 90 percent effective six months after the second dose?
a) Pfizer
b) Moderna
c) Covaxin
d) Covishield

4. Guillermo Lasso has been elected as the next President-Elect of which nation?
a) Guatemala
b) Ecuador
c) Zambia
d) Tanzania

5. Which state has imposed a complete curfew till May 1st?
a) Delhi
b) Kerala
c) Maharashtra
d) Punjab

6. Which state's airport has introduced Luminometer to detect virus load on surfaces?
a) Delhi
b) UP
c) Telangana
d) Maharashtra

7. Which nation's former captain has been banned for 8 years for breaching the ICC Anti-Corruption Code?
a) South Africa
b) New Zealand
c) West Indies
d) Zimbabwe

1. (a) Johnson & Johnson
The United States has recommended a pause in the administration of the single-dose Johnson & Johnson COVID-19 vaccine after reports of potentially dangerous blood clots post-vaccination.

2. (b) Egypt
The Egyptian authorities have seized the massive ship Ever Given, which had blocked the Suez Canal for almost a week. The mega-ship has been "seized" on court orders until the vessel's owners pay $900 million.

3. (b) Moderna
Moderna announced on April 13, 2021 informed that its vaccine is 90 percent effective six months after the second dose is administered. The company in a statement said that new results from a preclinical study of the Company's COVID-19 variant-specific vaccine candidates showed that its variant-specific booster vaccine candidates (mRNA-1273.351 and mRNA-1273.211) increase neutralizing titers against SARS-CoV-2 variants of concern.

4. (b) Ecuador
Conservative Former Banker, Guillermo Lasso was elected as the next President of Ecuador on April 11, 2021. Lasso won 52 percent of the vote in the runoff against opposition candidate Andrés Arauz, who was handpicked by leftist former President Rafael Correa. The 36-year-old conceded defeat on April 11, after which Lasso declared himself President-Elect.

5. (c) Maharashtra
Maharashtra Chief Minister announced a full curfew in the state on April 13, 2021, which will come into effect from 8 pm today and will remain in force till 7 am on May 1, 2021. The Chief Minister refrained from calling this a lockdown and urged people to see it as a Janta Curfew.

6. (a) Delhi
The Delhi International Airport Limited (DIAL) has introduced a "Luminometer" to detect the virus load on surface areas. The Luminometer will be able to show how infected the surfaces are. As per reports, the new variant of the virus is airborne.

7. (d) Zimbabwe
Former Zimbabwe captain Heath Streak was banned from all forms of cricket for eight years on April 14, 2021 after he accepted five charges of breaching the ICC Anti-Corruption Code.