The day’s updated quizzes cover topics such as weekend curfew, discovery of Lost Golden City, Wisden Almanack's ODI cricketer of the decade and Laureus World Sportsman of the Year Award 2021 among others. 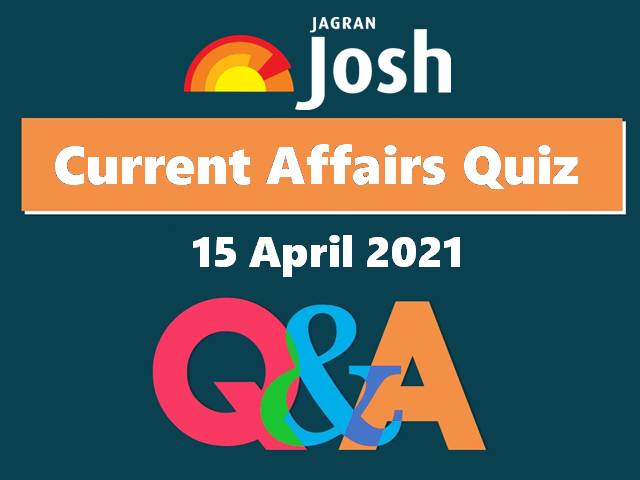 15 April 2021: The Current Affairs Quizzes section of Jagranjosh aims to help every competitive exam aspirant to revise the day at ease. The day’s updated quizzes cover topics such as weekend curfew, discovery of Lost Golden City, Wisden Almanack's ODI cricketer of the decade and Laureus World Sportsman of the Year Award 2021 among others.

1. Which among the following states has announced a weekend curfew?
a) West Bengal
b) Delhi
c) Uttarakhand
d) Tamil Nadu

2. Lost Golden City has been discovered in which nation?
a) Greece
b) Rome
c) Spain
d) Egypt

3. Which state has got India's first Floating Storage and Regasification Unit (FSRU)?
a) Gujarat
b) Maharashtra
c) Kerala
d) Telangana

4. Joseph Jouthe resigned as the Prime Minister of which nation on April 14th?
a) The Dominican Republic
b) Haiti
c) Jamaica
d) Cuba

5. Who among the following has not been nominated for Laureus World Sportsman of the Year Award 2021?
a) Rafael Nadal
b) Lewis Hamilton
c) Lebron James
d) Roger Federer

1. (b) Delhi
Delhi Chief Minister Arvind Kejriwal announced on April 15, 2021 that the government has decided to impose a weekend curfew in the national capital to control the spread of COVID-19. Only essential services will be allowed and curfew passes will be issued to those rendering essential services.

2. (d) Egypt
The Egyptian Ministry of Tourism and Antiquities on April 08, 2021, announced the discovery of a ‘Lost Golden City’ that was buried under the sands of the capital of Luxor in Egypt for the past 3,000 years.

4. (b) Hairi
Haitian Prime Minister Joseph Jouthe resigned on April 14, 2021 amid voilence and political strife. He did not give any explanation for his resignation. Jouthe was serving as the Prime Minister of Haiti since March 2020.

5. (d) Roger Federer
The 22nd Laureus World Sports Awards will be hosted by the Spanish city of Seville on May 6, 2021. Many major names from the sporting world are in contention for the Laureus World Sportsman of the Year Award 2021 including Lewis Hamilton, Rafael Nadal, LeBron James, Naomi Osaka, Robert Lewandowski and Federica Brignone.

6. (c) Axis Bank
A security guard from a private company stole Rs 4.04 crore from the currency chest of Axis Bank located in sector 34 in Chandigarh on April 10 night. The accused was nabbed later.

7. (c) Virat Kohli
India skipper Virat Kohli has been named Wisden Almanack's ODI cricketer of the 2010s decade. Kohli made more than 11,000 runs in the period, averaging over 60 and scoring 42 hundreds.