The day’s updated quizzes cover topics such as International Yoga Day 2021, 2023 ODI World Cup and hydrogen task force among others. 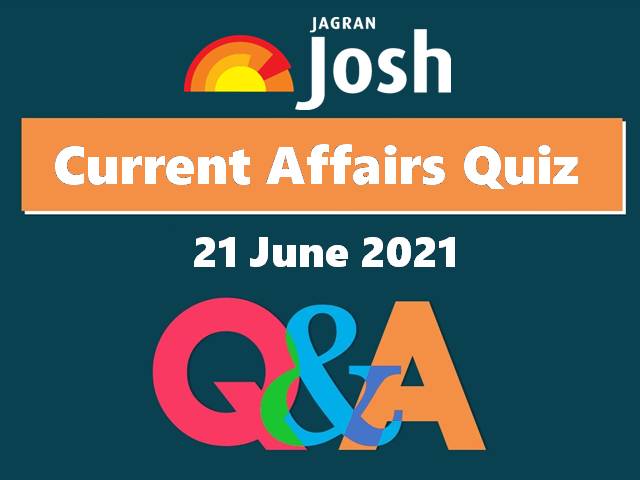 21 June 2021: The Current Affairs Quizzes section of Jagranjosh aims to help every competitive exam aspirant to revise the day at ease. The day’s updated quizzes cover topics such as International Yoga Day 2021, 2023 ODI World Cup and hydrogen task force among others.

1. What is the main theme for International Yoga Day 2021?

a) Yoga for health

b) Yoga for wellness

2. Which nation's Prime Minister lost the no-confidence vote in the Parliament?

3. Which country is scheduled to host the 2023 ODI World Cup?

4. Which nation is the fifth-largest recipient of FDI flows in the world?

5. India has launched a hydrogen task force with which nation?

6. Who has been elected as Iran’s eighth president?

7. When is Summer Solstice observed in the Northern Hemisphere?

The main theme of International Yoga Day 2021 is ‘Yoga for Wellness’. Prime Minister Narendra Modi highlighted that the theme has encouraged people even more to perform Yoga and added that he prays that every country, region, and people stay healthy.

Swedish Prime Minister Stefan Lofven was ousted on June 21, 2021 after he lost a no-confidence vote in the parliament, with a majority of parliament members backing his departure. The no-confidence motion received 181 votes in favour, 109 votes against and 51 abstentions.

India received USD 64 billion in Foreign Direct Investment in 2020, as per World Investment Report 2021 by the UN Conference on Trade and Development (UNCTAD) that was released on June 21, 2021. This makes India the fifth-largest recipient of inflows in the world.

Iran's ultra-conservative cleric and judiciary chief Ebrahim Raisi has been elected as the nation's eighth president. This was confirmed by the country's interior ministry on June 19, 2021.