The day’s updated quizzes cover topics such as Covid-free village contest,  The Kharg and mixing of COVID-19 vaccines among others. 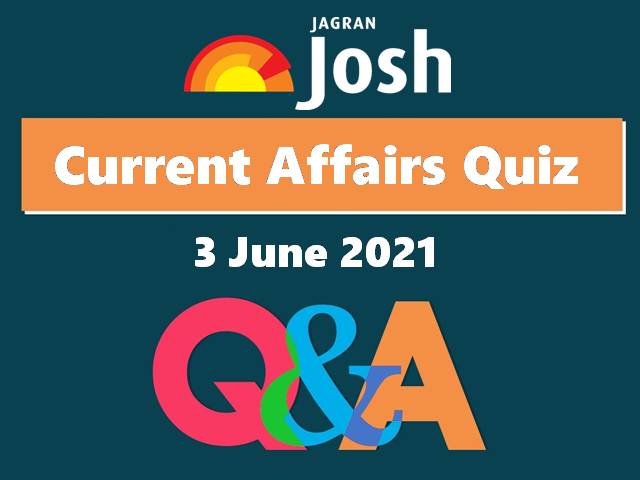 3 June 2021: The Current Affairs Quizzes section of Jagranjosh aims to help every competitive exam aspirant to revise the day at ease. The day’s updated quizzes cover topics such as Covid-free village contest,  The Kharg and mixing of COVID-19 vaccines among others.

1. Which state government has announced a ‘Covid-free village’ contest with an award of Rs 50 lakh for the winner?

2. The centre has finalised an agreement to book 30 crore vaccine doses of the second made-in-India vaccine. The vaccine is being developed by which manufacturer?

3. Issac Herzog has become the 11th President of which nation?

4. African Union has suspended the membership of which nation after two military coups in nine months?

5. India and ADB have signed a $2.5 million agreement to support the preparation of road upgradation project in which state?

6. Which among the following nations has allowed the mixing and matching of approved COVID-19 vaccines?

7. Which nation's largest naval ship, The Kharg, sank after catching fire on June 2, 2021?

8. NASA has announced plans to launch two new missions to which planet between 2028 and 2030?

The Maharashtra Government on June 2, 2021, announced the ‘Covid-free village’ contest with an award of Rs. 50 lakh for the village which will bag the first position. The contest has been introduced to encourage the villagers to follow the COVID-19 protocols to limit the spread of the deadly virus.

The Union health ministry has finalised arrangements to book 30 crore vaccine doses of Hyderabad-based Biological-E's COVID vaccine. The Ministry informed on June 3, 2021 that an advance payment of Rs 1,500 crore will be made to Biological-E from the Centre. The vaccine is the second made-in-India vaccine after Bharat Biotech's COVAXIN.

Labor Veteran Issac Herzog has been elected as the 11th President of Israel in a secret ballot in the Knesset (Parliament). The former labor leader was elected by the Parliament in a vote as the opposition lawmakers were holding the negotiations to form a coalition to end Prime Minister Netanyahu’s 12 straight years in office.

The African Union on June 2, 2021, suspended the membership of the Republic of Mali on the grounds of the second military coup detention of a president and prime minister in nine months.Military coup leader Colonel Goita had last week ordered the arrest of the country’s interim President N’Daw and Prime Minister Ouane causing global outrage.

India signed a $2.5 million project readiness financing (PRF) loan agreement with the Asian Development Bank on June 3, 2021 to support preparation and design activities to upgrade major district roads in Sikkim. The project will improve connectivity to important towns, rural areas and pilgrimage and tourist destinations in the state.

The National Advisory Committee on Immunization (NACI) of Canada has announced its updated guidance to permit mixing and matching approved Coronavirus vaccines in most scenarios.

Iran's largest navy ship, known as The Kharg, sank after catching fire in the Gulf of Oman early on June 2, 2021. According to Iranian media, the fire broke out at around 2.25 am during a training mission when the ship was near the port of Jask, which is a major shipping lane. No casualties were reported as the entire crew of the ship was able to escape the wreck in time.

The National Aeronautics and Space Agency (NASA) on June 2, 2021, announced its plans of launching two new space missions to Venus between 2028 and 2030. These two missions will be NASA's first one to the planet in decades and will aim to study the atmosphere and geologic features of the planet.