The day’s updated quizzes cover topics such as World Health Day, Forbes billionaires list 2021 and real GDP projection among others. 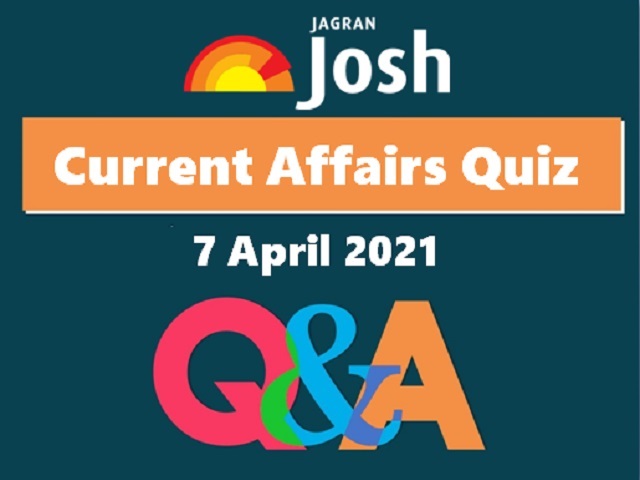 7 April 2021: The Current Affairs Quizzes section of Jagranjosh aims to help every competitive exam aspirant to revise the day at ease. The day’s updated quizzes cover topics such as World Health Day, Forbes billionaires list 2021 and real GDP projection among others.

2. Who topped the Forbes billionaires list 2021 with a net worth of $177 billion?
a) Elon Musk
b) Bernard Arnault
c) Mukesh Ambani
d) Jeff Bezos

8. Which nation has refused to issue vaccine passports?
a) France
b) UK
c) Canada
d) US

1. (b) April 7th
On the occasion of World Health Day on April 7, 2021, Prime Minister Narendra Modi said that it is a day to “reaffirm our gratitude and appreciation to all those who work day and night to keep our planet healthy.”

3. (a) 10.5 percent
The Governor of the Reserve Bank of India, Shaktikanta Das announced RBI's bi-monthly monetary policy review on April 7, 2021. The Monetary Policy Committee retained the projection of real GDP growth for 2021-22 at 10.5 percent and decided to keep the repo rate unchanged at 4 percent and reverse repo rate stands at 3.5 percent.

4. (c) 12.5 percent
The International Monetary Fund on April 6, 2021 projected a 12.5% growth rate for India in the year 2021. India's growth projection is stronger than that of China which was the only major economy globally to have a positive growth rate amid the pandemic in 2020.

5. (d) Alfred V Aho
Alfred V. Aho has won the AM Turing Award 2020 for his research and influential textbooks on fundamental algorithms and theory underlying programming language implementation. His books have educated generations of computer scientists.

6. (c) Pakistan
The FIFA Council Bureau suspended the Pakistan Football Federation (PFF) with immediate effect on April 7, 2021 due to third-party interference, which is a serious violation of the FIFA Statutes.

8. (d) US
White House press secretary Jen Psaki informed on April 6, 2021 that the United States will not issue vaccine passports. He stated that the US government is not going to support a system that requires Americans to carry a credential. He stated that there will be no federal vaccinations database and no federal mandate requiring everyone to obtain a single vaccination credential.