The day’s updated quizzes cover topics such as Oxi-van, YounTab Scheme, Covaxin Clinical Trials on children and Mount Merapi among others. 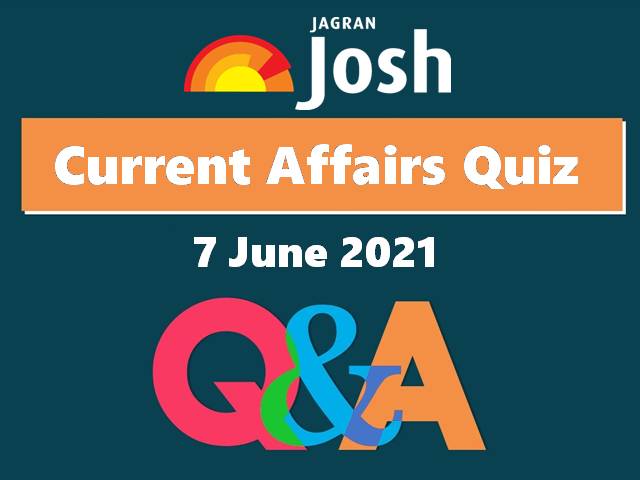 7 June 2021: The Current Affairs Quizzes section of Jagranjosh aims to help every competitive exam aspirant to revise the day at ease. The day’s updated quizzes cover topics such as Oxi-van, YounTab Scheme, Covaxin Clinical Trials on children and Mount Merapi among others.

1. Who among the following has withdrawn from the ongoing French Open?

2. When was World Environment Day observed?

3. Which state government has ordered private hospitals, nursing homes to administer Covaxin shots only to second-dose beneficiaries from 18-44 age group?

4. Which state government has decided to create an 'Oxi-van'?

5. Which among the following has been named Assam's sixth national park?

6. Which state/ UT has launched YounTab Scheme for students?

8. Mount Merapi erupted four times on June 3, 2021. It is the most active volcano of which among the following nations?

c) The Democratic Republic of the Congo

Tennis legend  Roger Federer withdrew himself from the ongoing French Open on June 6, 2021. Federer said that he decided to pull out from Roland Garros after discussions with his team. He stated that after two knee surgeries and over a year of rehabilitation, it is important that he listens to his body and make sure he does not push himself too quickly on the road to recovery.

World Environment Day is observed every year on June 5th all around the world with an aim to engage citizens, businesses, and governments to understand the importance of the environment and address environmental issues. The day's theme this year was ‘Reimagine, Recreate, Restore’ with a focus on ecosystem restoration.

The Delhi government on June 6, 2021 ordered all private hospitals and nursing homes to ensure that the Covaxin doses are used only to vaccinate those people from the 18-44 age group who are eligible for receiving the second dose in June. The order comes days after the Delhi High Court asked the Delhi government to consider this option to enable resuming vaccination of 18-44 age group people.

Haryana Chief Minister Manohar Lal Khattar announced on June 5, 2021 that the state will be creating an 'Oxi-van' spanning 80 acres in the Karnal district for people to visit. The Oxi-van will comprise 10 types of forests.

The Lieutenant Governor of Ladakh, RK Mathur on June 4, 2021, launched the YounTab Scheme for the students. Under the scheme, 12,300 tablets with pre-loaded online and offline content, will be distributed to the students of the Government schools from class 6th to 12th.

The All India Institute of Medical Sciences (AIIMS) in Delhi, has started screening children aged between 12-18 years for clinical trials of India's indigenous COVID-19 vaccine- Bharat Biotech's Covaxin, from June 7, 2021.

Indonesia's most active volcano Merapi erupted four times with lava flowing as far as 1,500 metres from the crater, according to the Geological Disaster Technology Research and Development Centre.