The day’s updated quizzes cover topics such as new AAI Chairman, Anamaya initiative and world's highest railway bridge among others. 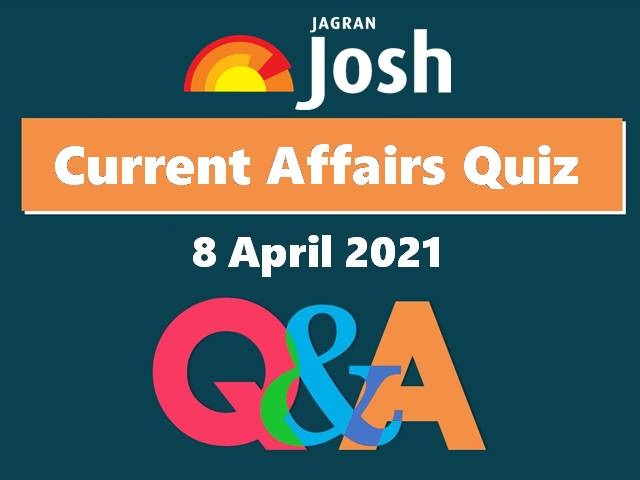 8 April 2021: The Current Affairs Quizzes section of Jagranjosh aims to help every competitive exam aspirant to revise the day at ease. The day’s updated quizzes cover topics such as new AAI Chairman, Anamaya initiative and world's highest railway bridge among others.

1. Who has been appointed as the Chairman of Airports Authority of India?
a) Sandeep Mehta
b) Sanjeev Kumar
c) Vineet Sinha
d) Shromit Bannerjee

3. Which country has temporarily banned travellers from India including its own citizens?
a) US
b) Australia
c) New Zealand
d) Canada

5. The centre has approved 14 road projects worth Rs 670 crores for which state?
a) Jharkhand
b) Bihar
c) Odisha
d) West Bengal

8. Which nation's institute has launched a study of allergic reactions to the COVID-19 vaccine?
a) Sweden
b) Switzerland
c) UK
d) US

1. (b) Sanjeev Kumar
Senior IAS officer Sanjeev Kumar took over as chairman of the Airports Authority of India on April 7, 2021. Kumar is a 1993 batch IAS Officer from Maharashtra Cadre. He was previously posted as State Commissioner-GST of the Maharashtra Government.

3. (c) New Zealand
New Zealand on April 8, 2021 temporarily suspended entry for all travellers from India, including its own citizens due to high number of COVID-19 cases in the country. This suspension will be for about two weeks and it comes after New Zealand recorded 23 new COVID-19 cases at its border, 17 of which were from India.

6. (d) Rajasthan
The Rajasthan government on April 7, 2021 approved relaxation in the maximum age limit to the Economically Weaker Section (EWS) like other reserved classes for appointment to state services.

7. (a) Jammu and Kashmir
Northern Railways completed the construction of the arch closure of the Chenab Bridge, the world’s highest railway bridge on April 5, 2021. The 1.3-kilometre-long bridge sits at a height of 359 metres above the bed of the Chenab river in the Jammu & Kashmir state.

8. (d) US
The US National Institutes of Health (NIH) announced on April 7, 2021 that it has kicked off a study to determine the risk of allergic reactions to the Pfizer-BioNTech and Moderna Covid-19 vaccines.