The IMD stated that the cyclone will  continue to move north-northwestwards and further weaken into a cyclonic storm in the next six hours. 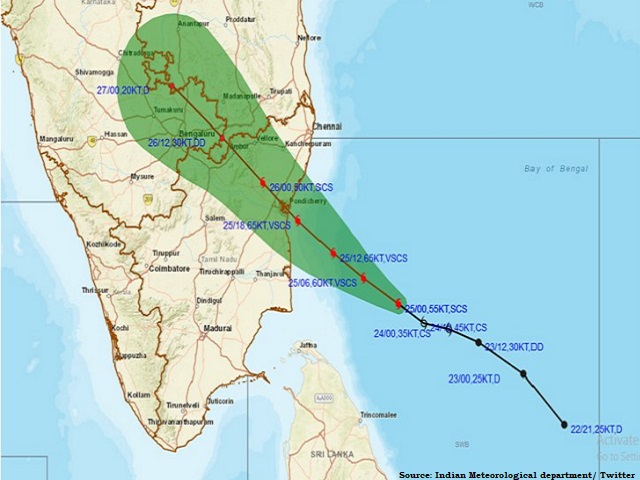 The IMD stated that the cyclone will  continue to move north-northwestwards and further weaken into a cyclonic storm in the next six hours. It also added saying that the winds are higher in the northeast sector therefore the northeast sector from Puducherry has still higher winds of 100-110 kmph.

The severe cyclonic storm is expected to gradually decrease to 65-75 kmph during next 3 hours with further northwest ward movement over land in districts of South-interior Karnataka. The fishermen in South-coastal Andhra Pradesh & North-coastal Tamil Nadu have been advised not to go to the sea.

The Union Home Minister assured that the centre is closely monitoring situation in Tamil Nadu & Puducherry in the wake of Cyclone Nivar. He had also spoken to Tamil Nadu CM Edappadi K Palaniswami and Puducherry CM V.Narayanasamy and assured all possible help from the centre. Shah further added that the National Disaster Response Force teams are on ground to help people in need.

We're closely monitoring situation in Tamil Nadu & Puducherry in the wake of #CycloneNivar. Have spoken to Tamil Nadu CM Edappadi K Palaniswami & Puducherry CM V.Narayanasamy and assured all possible help from the centre. NDRF teams are on ground to help people in need: Amit Shah pic.twitter.com/Tyj3lpB5ev

Puducherry CM V Narayanasamy visited different areas to assess damage by Cyclone Nivar. He stated that heavy rainfall of 23 cm in 24 hours was observed and no report of loss of life. He said,  "We've never seen such torrential rains here" and added that electricity will be restored in the city in 12 hours.

"Heavy rainfall of 23 cm in 24 hours was observed. No report of loss of life. We've never seen such torrential rains here. Electricity in the city will be restored in 12 hours," he says pic.twitter.com/JCWDno6LkC

Cyclone Nivar: All you need to Know!

Areas near landfall point witnessed spell of extremely strong winds, many trees got uprooted and major streets in Puducherry and Chennai were flooded due to torrential rain. Waterlogging were reported in parts of Chennai after the overnight rain.

So far no casualties have been confirmed officially but various media reports suggest that three people have died and over 2 lakh people were evacuated to safety.

The Cyclone Nivar intensified into severe cyclonic storm and made landfall  between Mahabalipuram and Karaikal in Tamil Nadu and Puducherry late yesterday evening. The governments of both Tamil Nadu and Puducherry had announced restrictions in view of the cyclone. Rail and bus services were either curtailed or suspended in the vulnerable districts.

The National Disaster Response Force had also issued precautions while its personnel were on alert in coastal areas. The NDRF DG informed that 12 teams had been positioned in Tamil Nadu, 2 teams in Puducherry  and 1 team in Karaikal.

Besides this, 3 teams were positioned in Nellore, 3 in Vizag and 1 team in Chittoor. Overall, 22 NDRF teams were available on the ground and another eight on standby. Total 30 teams were committed to provide support in the vulnerable areas.

How did Tamil Nadu prepare for Cyclone Nivar?

•All Inter and intra-district bus services and trains services were suspended in seven districts of Tamil Nadu from today.

•The people living in low-lying vulnerable areas were asked to shift to cyclone shelters. Besides this, zonal teams were positioned in every block and panchayat, to be mobilised for clearing of roads, setting up of electricity poles, informed Disaster Monitoring Zonal Officer, Cuddalore, Tamil Nadu.

•Along with this, 5 flood relief teams and a diving team were made ready for deployment at Chennai and one flood relief team each was on standby at Naval Detachment Nagapattinam, Rameswaram and air station INS Parundu.

How is Puducherry bracing for Cyclone Nivar?

•All shops and establishments will remain closed between this time. Only milk stations, petrol stations and pharmacies will be allowed to operate.

Puducherry: District Magistrate orders imposition of Section 144 from 9 pm tonight till 6 am, 26th Nov in entire Puducherry region, in wake of #CycloneNivar.

Follow these do’s and don’ts to #StaySafe from cyclone! #CycloneNivar pic.twitter.com/6yHaxWliMm