Cyclone ‘Tauktae’ has been moving north-northwestwards with a speed of approximately 20 km/h and most likely to hit the Gujarat Coast during the evening hours on May 17, 2021. 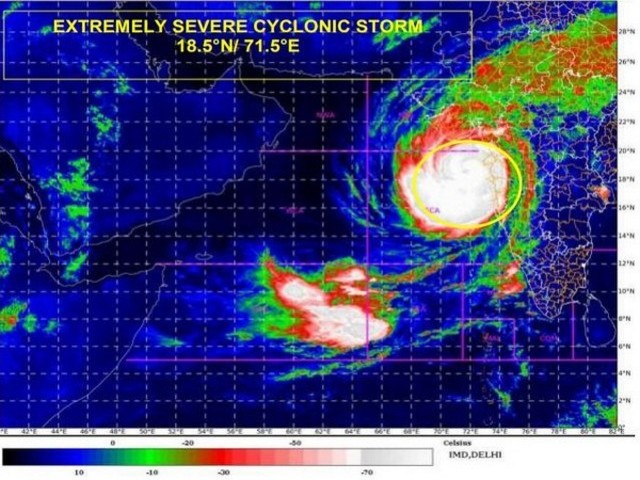 The Indian Meteorological Department on May 17, 2021, issued an ‘Extremely Severe Cyclonic Storm’ warning for Gujarat and Diu coasts.

The ‘very severe cyclonic storm’ Tauktae over the Arabian Sea has intensified into an ‘Extremely Severe Cyclonic Storm’. Cyclone ‘Tauktae’ has been moving north-northwestwards with a speed of approximately 20 km/h and most likely to hit the Gujarat Coast during the evening hours on May 17, 2021, with maximum wind speeds gusting up to 185 – 210 km/h.

#CycloneAlert As per the latest Satellite observation (INSAT-3DR) at 0230 IST, the Vortex "Tauktae" lay centered at 18.1N/71.6E, with a ragged eye & at a distance of around 290 KM south-southeast of Diu. The system is moving towards the Gujarat coast at a speed of approx 20kmph. pic.twitter.com/g49wpHsRzn

More than 1 lakh people have been evacuated from the coastal areas of Gujarat. IMD further stated that the cyclone will most likely hit the Gujarat coast between Porbandar and Mahuva (Bhavnagar district) between 3 pm – 6 pm on May 17.

Heavy to very heavy rainfall is expected over the districts of Saurashtra, Diu, Kutch, and adjoining coastal regions of Gujarat. Fishermen have advised not to venture in the Arabian Sea off Maharashtra, Goa, Daman, Diu, Dadra and Nagar Haveli coasts till May 18th noon.

NDRF Director General S N Pradhan informed that 50 teams of NDRF have been deployed currently and 50 more teams will reach Gujarat by the evening or late night. “Gujarat is most likely to experience the maximum impact,” he further added.

Several people died in Tamil Nadu and Karnataka due to electrocution and wall collapse.

The Indian Meteorological Department had issued a red alert on May 14, 2021, after informing about the low-pressure area over the Arabian Sea near Lakshadweep that led to a deep depression is likely to intensify into a ‘very severe cyclonic storm’ by May 17 with wind speeds up to 160 mph.

Depression over Lakshadweep area intensified into a Deep Depression , about 50 km north-northwest of Amini Divi, 310 km west-southwest of Kannur (Kerala), To intensify into a Cyclonic Storm in 12 hrs .To move north-northwestwards and reach near Gujarat coast by 18th pic.twitter.com/EaOI1pXiih

Cyclone Tauktae was predicted to impact the coast of Kerala, Tamil Nadu, Karnataka, Maharashtra, Lakshadweep, Goa, and most likely to hit the coast of Gujarat by May 18 morning.

What is the meaning of the cyclone name ‘Tauktae’?

Cyclone ‘Tauktae’ (pronounced as Tau ‘Te) means ‘gecko’ in the Burmese language. The name was given by Myanmar ‘gecko’ is a highly vocal lizard which is known for its peculiar vocalizations.

How are cyclones named?

What does an 'extremely severe cyclonic storm' mean?

Cyclones are classifieds based on the strength of wind speed. Cyclones with wind speeds ranging from 119 to 222 km/h and above are predicted as ‘very severe’ and ‘extremely severe’ cyclonic storms.