The Foreign Minister of Uzbekistan Abdulaziz Kamilov has invited India to participate in an international conference on regional connectivity on July 15-16, 2021. 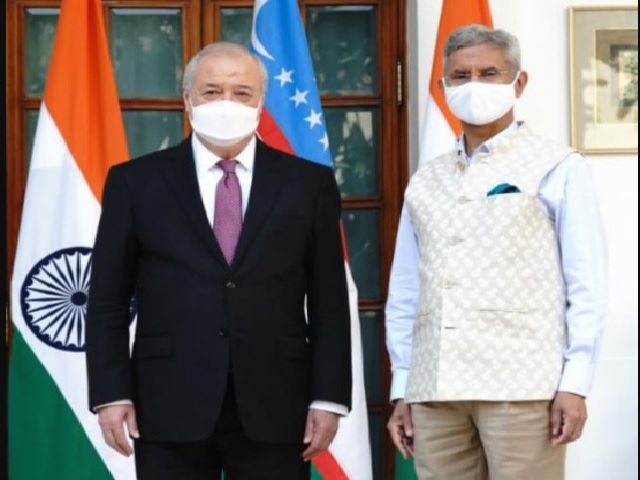 In a statement, the Ministry of External Affairs mentioned that during Abdulaziz Kamilov’s two-day visit to India on February 24-25, both the nations took stock of different aspects of bilateral cooperation between India and Uzbekistan.

The External Affairs Minister tweeted about the meeting with his Uzbekistan counterpart and mentioned that both the ministers discussed bilateral relations including defence, development, trade, connectivity, and culture.

Assessing the progress of India-Uzbekistan Summit 2020:

During the meeting, both the ministers positively evaluated the progress on the outcomes of the India-Uzbekistan virtual Summit held between PM Modi and Uzbekistan President Shavkat Mirziyoyev on December 11, 2020.

The MEA also informed that both the nations have also been actively cooperating in the multilateral and regional formats including the Shanghai Cooperation, United Nations, and the India-Central Asia Dialogue.

Uzbekistan invites India to participate in conference on regional connectivity:

The Foreign Minister of Uzbekistan Kamilov also extended an invitation to India participate in an international conference on regional connectivity. The Conference is being organized by Uzbekistan in Tashkent on July 15-16, 2021.

The ministers of India and Uzbekistan also discussed the evolving situation in Afghanistan and noted the significance of a peaceful and stable Afghanistan for stability, peace, and security.

Both the nations have many historical ties, as both of them being on the Silk Road as well as Babur, who founded Mughal Empire which ruled India from 1526-1857 was also born in Uzbekistan.

The first Prime Minister of India Jawahar Lal Nehru had visited Samarkand and Tashkent during his state visit to the Soviet Union on June 7-23, 1955. He again visited the nation during his state visit in 1961. On the economic front, the bilateral trade between both nations stood at USD $235 million as of 2017-18.