The latest quake was reported at 1.07 am with its epicenter near Tezpur, Sonitpur district at a depth of 30 km, mentioned in a report by the National Center for Seismology. Read all you need to know. 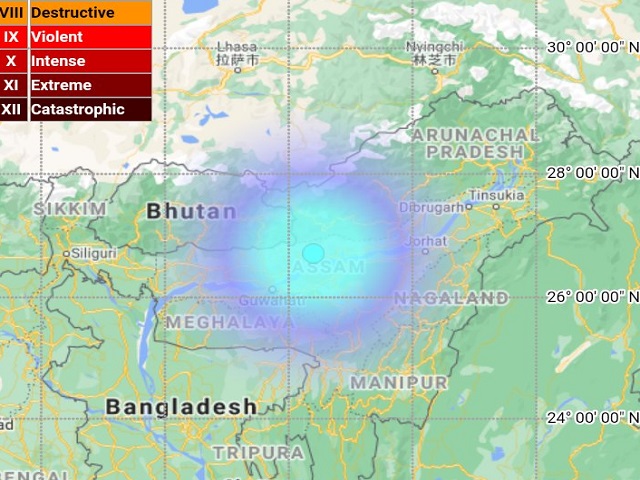 A 4.2-magnitude earthquake hit Assam on June 19, 2021, during the early hours. The region has experienced the fifth tremor in the past 24 hours.

The latest quake was reported at 1.07 am with its epicenter 39km west of Tezpur, Sonitpur district at a depth of 30 km, mentioned in a report by the National Center for Seismology.

No damage to property or injury has been reported so far.

Assam on June 18 was struck by two more quakes, including a 4.1 magnitude with its epicenter in Sonitpur district. Assam was shaken by a strong 6.4-magnitude earthquake on April 28, 2021.

Besides Assam, Manipur also on June 18, 2021, was struck by an earthquake of 3-magnitude with epicenter in Chandel district while a 2.6-magnitude tremor struck Meghalaya with an epicenter in West Khasi hills.

Assam was struck by 6.4-magnitude earthquake on April 28

•National Center for Seismology reported the epicenter at a depth of 17km located 9km away from Dhekiajuli town in the Sonitpur district.

Where is the fault? Why the northeast is seismically unstable?

•As per the preliminary analysis report by the National Centre for Seismology, “The events are located near to Kopili Fault closer to Himalayan Frontal Thrust (HFT). The area is seismically highly active falling in the highest Seismic Hazard zone V associated with collisional tectonics where Indian plate sub-ducts beneath the Eurasian plate.”

•Himalayan Frontal Thrust, also known as the Main Frontal Thrust (MFT), is a geological fault along the Indian and Eurasian tectonic plates’ boundary.

•The Kopili Fault closer to the Himalayan Frontal Thrust is a 300-km northwest-southeast fault running from the Bhutan Himalaya to the Burmese Arc.

•The United States Geological Survey (USGS) defines a geological fault as a fracture along which the blocks of either plate have moved relative to one another parallel to the fracture to cause friction.

•Experts state that the northeast region is in the highest seismological zone. The tectonic stress below the surface keeps building and is released frequently through high-intensity earthquakes.

History of earthquakes in Assam

•As per the National Seismological Report, Assam has endured several moderate to high-intensity earthquakes.

•In 1950, the great Assam-Tibet earthquake, one of the worst earthquakes in the region was recorded with a magnitude of 8.6 on Independence Day.