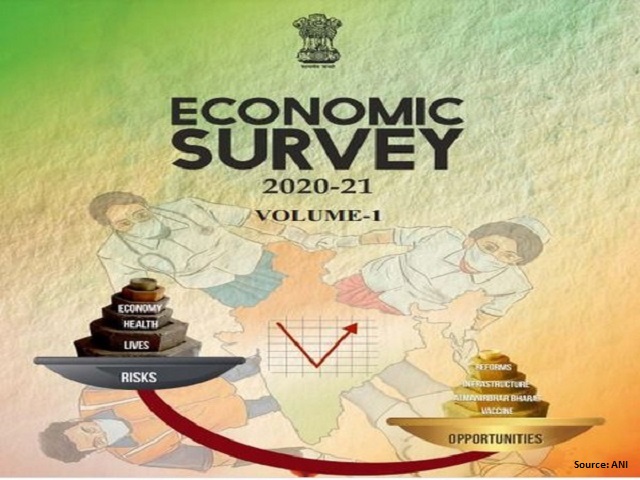 Following the presentation of the Economic Survey in both the houses of the Parliament by Finance Minister Nirmala Sitharaman, Chief Economic Adviser KV Subramanian addressed a press conference in which he introduced the highlights of the annual survey document.

Theme: The Economic Survey 2020-21 has been dedicated to all the COVID-19 warriors, who have really helped in upholding India.

•The cover of the economic survey shows these COVID warriors including the nurses, doctors and scientists who have helped in developing the vaccine in record time and sanitation workers who have come together in the time of adversity to uphold India. The cover also shows v-shaped recovery that has happened in the India economy.

•This year's economic survey is being delivered in an e-book format. The Finance Ministry has also launched an official Economic Survey app for smooth access to the document.

•The Economic Survey 2021 states that India's policy response during the COVID-19 pandemic was guided by Research in Epidemiology and Economics to minimize large losses.

•India's policy response also derived from the extensive research on the Epidemiology, especially that looked at the Spanish Flu epidemic of 1918 to come up with its policy response.

•One of the key things that was pointed out was the need to flatten the pandemic curve, because that gives time for the health and testing infrastructure to be ramped up.

•One of the key learnings from this research was that the pandemic spreads faster in higher and denser populations and the intensity of the lockdown matters most at the beginning of the pandemic.

•The research showed that one unit increase in the population density has far greater impact on the spread of the pandemic at the onset compared to later. This is one of the key principles that guided India's policy response. 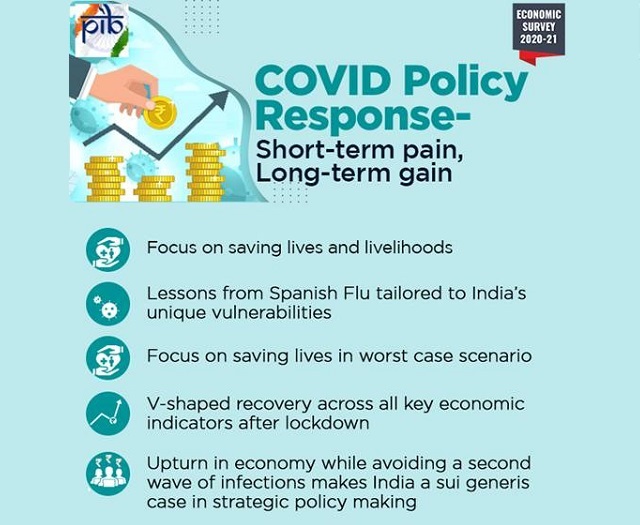 What could have been vs what actually happened

Result of the research: India has done really well when it comes to the actual number of COVID-19 cases. India avoided around 37 lakh cases according to the survey's estimation and about one lakh deaths.

The same analysis was done across states as well and results are stated below:

The survey team also analysed the stringency of the lockdown across India and they found that the intensity of the initial lockdown correlates strongly with the difference in the estimated vs actual cases across country.  They also developed a stringency lockdown index for the states, which can be used for future research as well.

Strong correlation of lockdown with decline in cases and deaths is found across states, not just within a few states. Hence Economic Survey infers that lockdown had a causal effect on saving lives and livelihoods: Chief Economic Advisor KV Subramanian pic.twitter.com/qZLFnghaMs

Effect of Pandemic itself

-Even without intense lockdowns, individuals would not have gone out anyway.

-This means that contact-bases service sectors were severely impacted

-Precautionary motive to save goes up during times of uncertainty, leading to discretionary spending.

-Uncertainty of demand would have effected corporate investment.

•So, even without a lockdown pandemic would have created significance economic impact as it did in other countries, which did not have intense lockdowns early on.

•The lockdown actually ensured a coordinated response across the entire country, which saved lives and enabled v-shaped recovery.

Even without lockdown, #COVID19 pandemic would have created a significant economic impact. But what the lockdown did ensure is help a coordinated response, enabling 'saving lives and livelihoods': Chief Economic Advisor KV Subramanian pic.twitter.com/pUJ7VSvP03

-PMJDY balances increased during the lockdown

•India approached its response to the pandemic in a calibrated manner by at first, purely focusing on providing necessities. Almost 18 crore people were provided with free food, which is possibly the largest free food programme in the world.

-Emergency credit measures were given
-Liquidity measures and forbearance were announced

•Under the unlock phase, India announced demand side measures to enable discretionary consumption including the Aatmanirbhar Bharat II and III measures, which were focused on capital expenditure and wage subsidy programme.

•A slew of structural reforms were announced to enhance supply in medium-long run to avoid loss of productive capacity.

•The reforms mainly focused on:

-strengthening the potential of primary and secondary sectors
-to create jobs and enable aggregate demand.

•The Economic Survey 2021 showed that an increase in public health spending from 1% to 2.5% of GDP, as envisaged in National Health Policy-2017 can reduce out-of-pocket spend from 65% to 30% of overall healthcare spending.

•The annual survey noted that the emphasis on the National Health Mission should continue as it has played critical role in giving increased access of the poorest to pre-natal & post-natal care, & institutional deliveries.

•The survey also noted that to enable India to respond to pandemics, health infrastructure must incorporate flexibility-as events requiring healthcare attention may not repeat identically in future.

•Further, it revealed that telemedicine needs to be harnessed to fullest by investing in internet connectivity & health infrastructure, given its potential to provide health access in remote areas

•Besides this, the survey highlighted that it is critical to design policies that mitigate information asymmetry in healthcare, which creates market failures & thereby renders unregulated private healthcare sub-optimal.

#EconomicSurvey2021 ↑ in public health spend from 1% to 2.5% of GDP, as envisaged in National Health Policy-2017, can ↓ out-of-pocket spend from 65% to 30% of overall healthcare spending #SavingLivesAndLivelihoods #VShapedRecovery (1/5) @FinMinIndia @PIB_India @nsitharamanoffc pic.twitter.com/Vpct8eqY1m

•The Economic Survey 2021 shows that PM-JAY continued to be used significantly for high frequency, life-saving procedures like dialysis, without disruption even during the COVID pandemic and the lockdown.

•The Economic Survey 2020-21 has constructed a Bare Necessities Index at rural, urban & all India level, with 26 indicators on 5 dimensions- sanitation, water, housing,micro-environment, & other facilities.

•The survey showed that all states have increased access to bare necessities in 2018 in comparison to 2012. The highest access was recorded in states like Punjab, Kerala, Gujarat, Punjab and Haryana and lowes was recorded in Jharkhand, Odisha, West Bengal and Tripura.

•The inter-state disparities in the access to “the bare necessities” also showed a decline in 2018 in comparison to 2012 across rural & urban areas.

•Further, the annual survey noted that the access to the bare necessities has improved disproportionately more for the poorest households in comparison to the richest households across rural & urban areas.

•The survey shows that the government contribution to research and development expenditure is 3 times the average contributed by governments in the top 10 economies.

•Further, the survey noted that India’s business sector contributes much less to gross expenditure on R&D (37%) in comparison to businesses in each of the top 10 economies (68% on average).

•The survey also noted that the resident share in patent applications must rise for India, as currently Indian residents contribute only 36% of patents filed in India as against average of 62% in top 10 economies.

•India has to focus more on strengthening institutions & business sophistication to improve its performance on innovation output.