Explained: What is G7 and its agenda? What is in it for India?

India is a natural ally for the G7 countries to fight against threats such as terrorism, authoritarianism, violent extremism, disinformation, and economic coercion. What is G7? Explained. 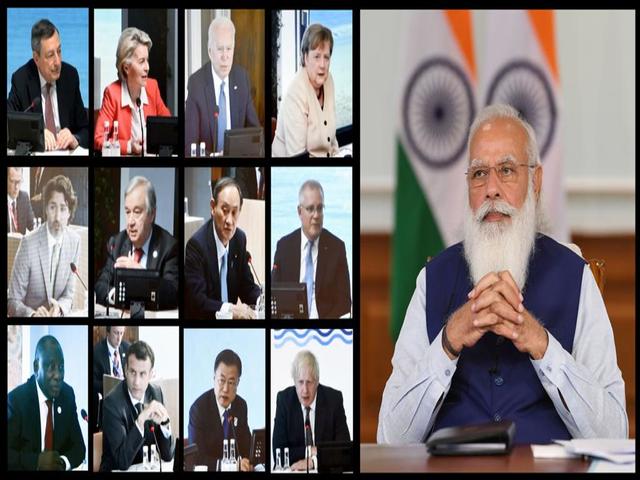 Prime Minister Narendra Modi on June 13, 2021, during a virtual address at a session on ‘Open Societies and Open Economies’ at the G7 Summit said India is a natural ally for the G7 countries to fight against threats such as terrorism, authoritarianism, violent extremism, disinformation, and economic coercion.

Some of the world’s most powerful leaders from the UK, Canada, France, Germany, Italy, Japan, and the US have come together at the G7 Summit being hosted by the UK in Carbis Bay, Cornwall, UK from June 11 to 13, 2021. India, Australia, South Africa, and South Korea have been invited as guest countries to the summit this year.

•The Group of Seven, also known as G7 is an inter-governmental forum where the world’s advanced economies and open societies come together to deliberate on global pressing issues.

•The member countries of G7 represent 10 per cent of the world’s population and 40 per cent of global GDP (gross domestic product).

•The inception of the G7 dates back to a meeting between current G7 member countries, excluding Canada, that happened in 1975. The meetings started as the ‘Library Group’ founded by then-US Treasury Secretary George Shultz.

•The heads of state and government of six leading countries the US, Germany, France, Japan, and the UK gathered at the meetings to deliberate on stabilizing the global economy that had gone into recession due to the 1973 OPEC oil ban.

•Canada and Russia joined the group in 1976 and 1998 respectively, and the group was renamed as the G8 until 2014. Following the Russian annexation of Crimea, the group of seven (G7) held its meetings annually without Russia.

•In the past, the G7 leaders have worked on action plans to combat tax evasion, strengthen the global economy, save 27 million people from AIDS, malaria, and tuberculosis, and funded the education of millions of children living in the poorest countries. In 2015, the leaders worked on securing the Paris Climate Agreement to limit global emissions.

•The theme of the G7 summit in 2021 is ‘Build Back Better’. The G7 leaders signed the Carbis Bay Declaration on health and vow to reverse the global devastation caused by a coronavirus. The leaders also agreed to kick off a new infrastructure investment partnership to increase international climate finance and address the climate crisis.

•India was first time invited to the 29th G8 Summit (when Russia was a member country) in 2003 when the then Indian PM Atal Bihari Vajpayee attended the summit in France.

•India then participated in the G7 outreach summit from 2005 to 2009 when the then Indian PM Manmohan Singh represented India.

•Prime Minister Narendra Modi has attended the G7 Summit twice. In 2019, PM Modi attended the summit when the country was invited to the G7 Biarritz Summit as a ‘Goodwill Partner’. He represented India for the second time as a guest country at the G7 Summit being held in Cornwall from June 11 to 13, 2021. The country joined via a video link.

•Former US President Donald Trump had also invited India to the G7 Summit in 2020 but the summit was canceled due to the coronavirus pandemic.

•However, critics around the world say the G7 Summit is outdated and ineffective as two of the world’s largest economies – India and China are excluded as member countries. Trump had also suggested that India along with Australia, Russia, and South Korea be included in the group and be renamed as ‘G10 or G11’.

•India has a lot to gain as the world’s wealthiest countries gather to tackle the global pandemic. With COVID-19 as the prime focus of the summit, the member countries will be solving the questions around vaccination and easing the distribution of vaccines.

•The UK Prime Minister Boris Johnson in a statement ahead of the G7 Summit had said, the UK will give away at least 100 million surplus COVID-19 vaccine doses within the next year, 5 million beginning in the coming weeks. India coming out of the deadly second wave of the pandemic will most likely be the recipient of the surplus doses that the member countries will commit to sharing with the world.