How fast the Universe is expanding? Dark sirens could tell that exactly, says cosmologists

Hubble constant helps in determining the expansion rate of the Universe but there have been conflicting results over the years. How will dark sirens solve the cosmological crisis? Read on. 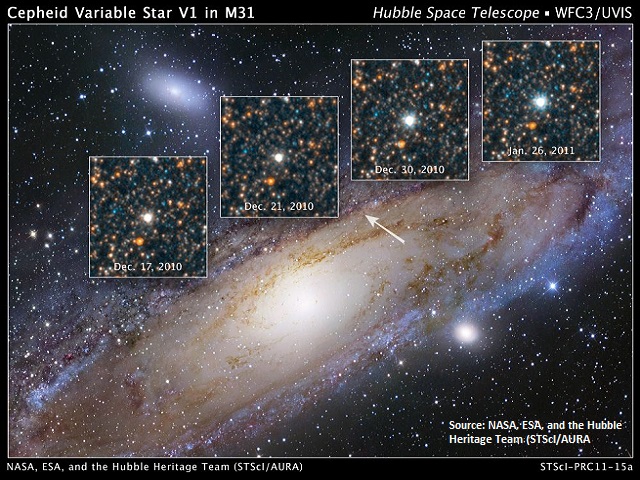 Views of a Cepheid star over the years. These flickering stars help in producing measurements of the Hubble constant

A new highly anticipated study by a team of cosmologists around gravitational waves from dark sirens has been found promising in solving the long-lived crisis of how fast the Universe is expanding.

Hubble constant helps in determining the expansion rate of the Universe and is measured in two ways but there have been conflicting results over the years.

The tricky part is precisely gauging the galaxies’ distance. The first method devised depended on measuring the distance of galaxies by observing flickering stars called Cepheids in the local universe. Another method was based on measuring the cosmic microwave background (CMB), relic radiation from the Big Bang.

The values from both methods have put the cosmology world into a fray. There must be a more precise method to measure the Hubble constant.

What is Hubble Constant?

In the 1920s, American astronomer Edwin Hubble discovered that the Universe is expanding and noted that the farther away the galaxies are, the faster they are moving away from the Milky Way. The relation between the speed and distance between the Earth and the celestial objects is known as the Hubble Constant.

Since the two methods in place are not producing a uniform result. Cosmologists have been looking into dark sirens for the answers.

What are Dark Sirens?

Since 2015, the Laser Interferometer Gravitational-wave Observatory (LIGO) has been picking up on the sound of these collisions.This data has been critical to the scientists in deciphering how far the collision happened.

However, so far, the LIGO technology has not been able to produce the precise value of the Hubble Constant. Over the next five years, the LIGO will be getting upgrades that will enable precise measurements. The Kamioka Gravitational Wave Detector (KAGRA) in Japan recently joined the European and the US facilities. An Indian detector is also on its way to come online by 2024.

According to the calculations of a team of scientists led by Ssohrab Borhanian (Pennsylvania State University), soon the network will be able to pinpoint where in the Universe a dark siren collision exactly happened with 400 times better accuracy. Such insight into dark sirens offers a quicker route to solving the crisis of precision cosmology, deciphering the Hubble Constant, and finding how fast the Universe is expanding.

Maya Fishback, a LIGO team member at Northwestern University in Evanston, Illinois, and a gravitational wave astronomer, who is not associated with the work also shared that dark sirens can potentially provide such excellent distance measurements from pure physics alone, they are extremely unique, and extremely clean and appealing.