India, France ink space agreement for Gaganyaan mission, all you need to know about the mission

With the success of the Gaganyaan mission, India will become the fourth country to successfully send humans to space. 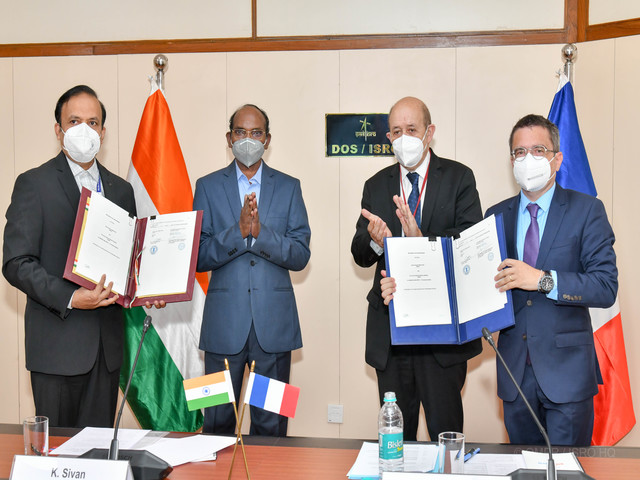 During a three-day visit to India that started on April 13th, Jean-Yves Le Drian, Foreign Affairs Minister of France, visited the ISRO headquarters in Bengaluru. After talks with Dr. K. Sivan, Chairman, ISRO, the French minister announced the agreement of cooperation of France for ISRO’s Gaganyaan, a Human Space Flight Mission that will allow Indian flight physicians to share the French facilities for training purposes.

Key Highlights of the space agreement between India-France

Under the space agreement between Indian and France for ISRO’s Gaganyaan, the French Space Agency CNES will be training India’s flight physicians and CAPCOM mission control teams in France at the CADMOS Centre for the development of microgravity applications and space operations at CNES in Toulouse and the European Astronaut Centre (EAC) in Cologne, Germany.

CNES will support implementing scientific experiment plan on validation missions, the use of French equipment, medical instruments, and consumables by Indian astronauts and the exchange of information on food packaging and the nutrition programme.

The French equipment made by CNES, which is still operating at the International Space Station (ISS), will be made available to the Indian crews.

The CNES will also provide fireproof carry bags made in France to protect the equipment from radiation and shocks.

This cooperation agreement could also extend to parabolic flights operated by Novespace for astronaut training and testing instruments, as well as provide technical support for the construction of an astronaut training centre in Bangalore.

India is already in an agreement with Russia for the training of four astronauts shortlisted for the Gaganyaan mission while in talks with Australia for having a ground station at Cocos Islands for the mission.

The first space agreement between India and France was signed in 1964.

Both the countries share a joint vision for space cooperation that include joint missions to examine weather and climate, address global challenges such as climate change, work jointly on an inter-planetary mission to Venus and Mars, to name a few.

This year, ISRO will conduct the launch of the joint Oceansat-3 Argos mission.

About the Gaganyaan Mission

Gaganyaan is a mission by the Indian Space Research Organization (ISRO) that will send three astronauts, two men and a woman, to space by 2022. The astronauts will stay up there for five to seven days.

Before executing the manned mission of Gaganyaan, two unmanned mission were to be carried in December 2020 and June 2021. The missions were disrupted due to the pandemic.

With ISRO’s Geo-Synchronous Launch Vehicle (GSLV), the manned mission will place the Gaganyaan spacecraft in a Low Earth Orbit (LEO) of 300-400 kilometres.

With the success of the Gaganyaan mission, India will become the fourth country to successfully send humans to space.

Significance of the Gaganyaan Mission

The Gaganyaan mission will give a boost to India’s role in the space industry.

It will manifest 15,000 employment opportunities in the Indian private sector for space missions.

This will also boost the research and technology development areas in the space industry, and also serve as an inspiration to the youth.