PM Narendra Modi called the moment of the completion of the arch of the Chenab Bridge as an example of ‘Sankalp se Siddhi’. Read everything you need to know about the world’s highest bridge. 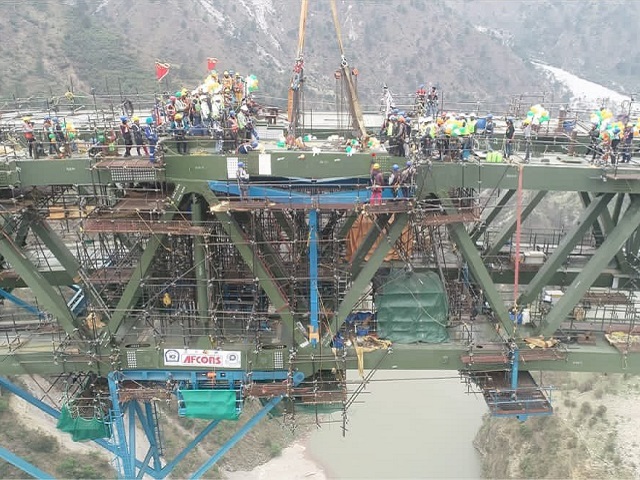 On April 05, 2021,Northern Railways completed the construction of the arch closure of the Chenab Bridge, the world’s highest railway bridge. The 1.3-kilometre-longbridge sits at a height of 359 metres above the bed of the Chenab river in the Jammu & Kashmir state.

Look at the video for the main features of USBRL Project & Chenab Bridge. pic.twitter.com/IdiJtNsdtk

PM Narendra Modi called the moment of the completion of the arch of the Chenab Bridge as an example of ‘Sankalp se Siddhi’. Taking to Twitter, he said, "Capability and trust of the countrymen are setting an example before the world. This feat of construction does not only reflect India's growing prowess in the field of state-of-the-art engineering and technology but also exemplifies the country's changing work culture marked by the ethos of 'Sankalp se Siddhi'.

When the 5.6-metre last piece of closure segment metal was fitted at the highest point of the arch on Monday, Railway Minister Piyush Goyal tweeted, “A moment of pride for India!”

The bridge, as a part of the Udhampur-Srinagar-Baramulla rail link project (USBRL), will boost the connectivity of the Kashmir valley with the country.

A moment of pride for 🇮🇳! The arch of Chenab bridge, connecting Kashmir to Kanyakumari has been completed.

With an arch span of 467m, it is the world’s highest railway bridge.

Railway Minister Piyush Goyal along with senior officials watched the lowering of the arch by cable crane through the LIVE video link sitting in Delhi.

"It is a historic day for the Northern Railways and a milestone in the completion of the USBRL project, connecting Kashmir with the rest of the country. The project will be completed within two and a half years," said Ashutosh Gangal, Northern Railway General Manager.

The self-supporting arch is an engineering marvel, he added.

The Ministry is hopeful of completing the further development of the bridge within a year. The entire rail project is expected to be completed within two and half years.

The Chenab Bridge: All you need to know

• The Chenab Bridge located in Jammu & Kashmir is the world’s highest railway bridge.

• The 1.3 kilometres-long bridge sits at a height of 359 metres above the bed of the Chenab river in the Jammu & Kashmir. It is deemed to be 35 metres higher than the Eiffel Tower.

• The weight of the arch of the bridge is 10,619 metres. The Indian Railways had built the members of the arch by overhead cable cranes for the first time in India.

• The arch comprises steel boxes filled with concrete to enhance the stability of the bridge.

• It will be constructed at a cost of Rs 1,486 crore. The bridge, as a part of the Udhampur-Srinagar-Baramulla rail link project (USBRL), will connect Katra-Banihal. The route via road between Katra-Banihal currently is 12-hour long. After the completion of the bridge, the route via train would be halved.

• As per the statement by the Railway ministry, the bridge has been constructed for blast load in consultation with the DRDO for the first time in India. It can withstand high wind speed upto 266km/hr.It can also absorb the earthquake forces of the high-intensity zone-V area in India.

• In another first feat by the Indian Railways, a NABL-accredited lab was constructed, and phased array ultrasonic machines were used at the site of weld testing.