India has assumed the Chairmanship of BRICS for 2021 and will be hosting this year's summit. The BRICS grouping comprises Brazil, Russia, India, China and South Africa. 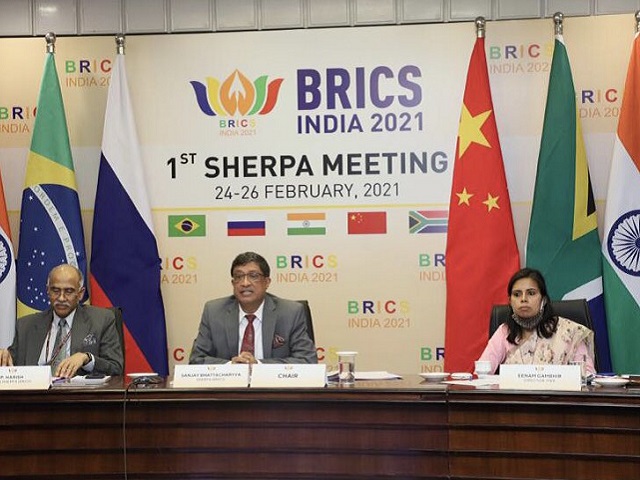 BRICS India 2021: India has begun its BRICS Chairship with the inaugural three-day-long Sherpas' meeting. This was informed by Ministry of External Affairs Spokesperson Anurag Srivastava on February 24, 2021.

Secretary (CPV & OIA) chaired the meeting and introduced India's themes, priorities, and calendar for BRICS Summit 2021, tweeted Srivastava. He further said that India looks forward to continuing productive discussions with our BRICS partners over the next two days.

•  During the meeting, India presented its priorities for its BRICS Chairmanship 2021 under the theme -"BRICS@15: Intra BRICS Cooperation for Continuity, Consolidation and Consensus”

(i) Reform of the Multilateral System

•  The calendar of events of BRICS 2021 were also presented on the occasion followed by discussion and feedback sessions.

•  Briefings and presentations were also made by various government Ministeries on  India’s priorities across various thematic areas during its Chairship.

•  Some of the key focus areas include:

-Agriculture with a special emphasis on Sustainable Development and Digital Agriculture

-Cooperation in countering the Covid-19 pandemic and Traditional Medicine

•  Another key focus area was cultural and people-to-people engagement during the three day meeting.

•  All the BRICS partners appreciated the theme and priorities selected by India for its Chairmanship year and expressed support for the new initiatives proposed by India.

• BRICS Sherpas have now agreed to meet again in two months time to review the progress made on the discussions and the programme of upcoming Foreign and other Ministerial meetings.

•  China had stated on February 22, 2021 that they support India for hosting the BRICS Summit 2021 and expressed interest in working with India to strengthen the cooperation among the five-member group of emerging economies of which both China and India are critical members.

•  As per reports, Chinese President Xi Jinping may visit India later this year while extending the support to India in hosting this year's summit.

•  Chinese Foreign Ministry spokesman Wang Wenbin said BRICS had become an influential grouping and Beijing supported New Delhi's efforts as host. Wang said this when asked about Xi's possible attendance at the summit and whether the border tension would affect their multilateral cooperation.

•  Wang also stated that China attaches great importance to the BRICS mechanism and it supports the Indian side in hosting the meeting and is willing to work with India and other BRICS countries in expanding cooperation on economy, politics and people-to-people exchanges.

•  The statement comes a day after India and China "positively appraised" the smooth completion of disengagement of frontline troops in the Pangong Lake area.

India and China agreed to continue their communication and push for a mutually acceptable resolution of the remaining issues along the Line of Actual Control (LAC) in the Western Sector.

The exchange came during the 10th round of the China-India Corps Commander level meeting, which was held on the Chinese side of the Moldo/Chushul border meeting point on February 20, 2021.

During the meeting, both India and China had a candid and in-depth exchange of views on other issues along the LAC in the Western Sector.

The two countries have had a stand-off along the LAC since April-May 2020 due to actions by the Chinese army.