These four Rajya Sabha MPs met Vice-President Venkaiah Naidu on June 20 to tender their resignation from the TDP. In the letter to Rajya Sabha chairman Venkaiah Naidu, the four TDP MPs, who were seniors in the Telugu Desam Party and considered to be extremely close to Naidu, said that they were “inspired and encouraged by the impeccable leadership of Narendra Modi".

As per anti-defection law, two-thirds of the strength of a party should agree to a ‘merger’. Therefore, these four out of six member will qualify as a independent entity in Rajya sabha and they asked to Rajya Sabha chairman to consider them associate of BJP.

Following are the three TDP Rajya Sabha MPs who have switched to BJP:

This is the letter written by the four TDP MPs to the Rajya Sabha Chairman: 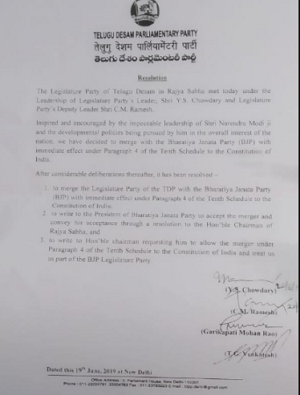 The TDP had faced a huge defeat in the recent state assembly elections conducted in Andhra Pradesh.

Jagan Mohan Reddy's YSR Congress had tromped over TDP in both state and Lok Sabha Elections and Reddy was sworn in as the new Chief Minister of Andhra Pradesh on June 30, 2019.

Since then, the four TDP MPs are reported to have been in touch with BJP National President Amit Shah.