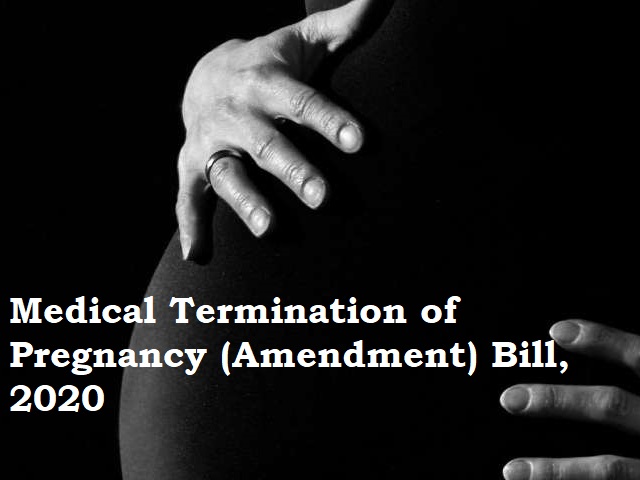 The 24-week upper limit of legal abortions is in line with the advancements in medical technology that allows removal of foetus at a relatively advanced stage of pregnancy. The Union Cabinet had approved the Medical Termination of Pregnancy (Amendment) Bill on January 29, 2020 under the chairmanship of PM Narendra Modi.

• The Medical Termination of Pregnancy (Amendment) Bill, 2020 proposes requirement for an opinion from one provider for termination of pregnancy up to 20 weeks of gestation and introducing the requirement of opinion from two providers for termination of pregnancy up to 20-24 weeks of gestation.
• The amended bill proposes increasing the upper gestation limit from 20 to 24 weeks for special categories of women such as vulnerable women including survivors of rape, victims of incest and others such as differently-abled women and minors.
• Under the amendment bill, the upper gestation limit will not apply in cases of substantial foetal abnormalities diagnosed by the Medical Board. The composition, functions and other details of the Medical Board will be prescribed subsequently in Rules under the Act.
• Further, the name and other details of the woman whose pregnancy has been terminated shall not be revealed except to a person authorised by the law.

The Medical Termination of Pregnancy Amendment bill aims to ensure the safety and well-being of women. The proposed increase in gestation limit will ensure dignity, autonomy, confidentiality and justice for women who need to terminate their pregnancy.

The Ministry of Health and Family Welfare proposed the amendments in the termination of pregnancy bill after extensive consultation with various stakeholders and several ministries. The move aims to increases the access of women to safe abortion services, taking into account the advances made in medical technology.

Recently, several petitions were submitted to the Courts, seeking permission for aborting pregnancies at a gestational age beyond the current permissible limit on grounds of foetal abnormalities or pregnancies due to sexual violence faced by women.