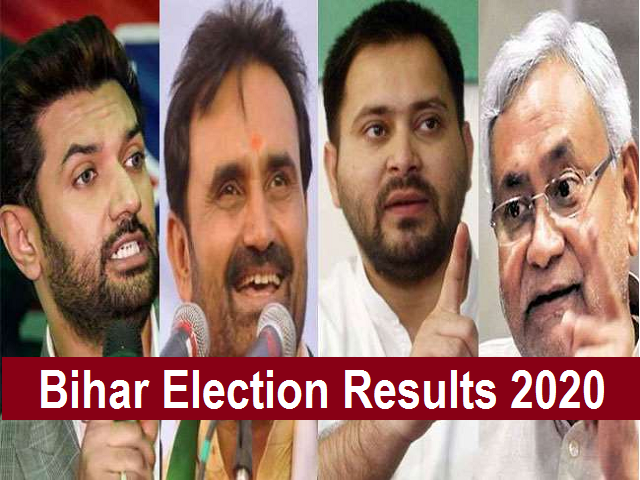 Bihar Election Result 2020 Declared: The National Democratic Alliance (NDA) retains its power in Bihar by winning majority in the Bihar General Election 2020; JDU's Nitish Kumar set to be the Bihar Chief Minister again. On the other hand, Tejashwi Yadav-led RJD emerges as single largest party by winning a total of 75 seats. Get here Vidhan Sabha results of key constituencies of Bihar including Raghopur, Madhepura, Hasanpur, Bankipur, Patna Sahib, Jamui & others. The Bihar Election Results 2020 announcement puts an end to the fierce battle between the two key alliances National Democratic Alliance (NDA) and the Mahagathbandhan (MGB).

Have a look at the key alliances that are battling against each other in the state election and their CM-candidates:

Here we have shared below the names of key candidates who have been pitied for Chief Ministerial position by the political parties or alliances:

Bihar Election Result 2020 has been declared by the Election Commission of India for all 243 constituencies of the state. Have a look at some of key constituencies and their winning candidates below:

Bihar Election Result 2020:The Bihar Election Results 2020 of eight seats have been declared by the Election Commission. These seats are Darbhanga Rural, Darbhanga, Hayaghat, Sakra, Kusheshwar Asthan, Alinagar, Aurangabad and Sahebpur Kamal. Have a look at the winners of these constituencies:

Bihar Election Result 2020: The recent trends show National Democratic Alliance, NDA's lead in 128 constituencies and the Mahagathbandhan is leading in 105 seats. Apart from these key alliances, the BSP, AIMIM, and LJP are leading in two seats each.

Patna Sahib Election Result 2020 Update: BJP's Nand Kishore Yadav is leading ahead of the Congress' Praveen Kushwaha by a margin of over 6700 votes from Patna Sahib Vidhan Sabha.

Bankipur Election Results 2020: Luv Sinha trails behind Nitin Nabin of the Bhartiya Janata Party. Plurals Party chief Pushpam Priya Choudhary is the last on the list, as per the current trends.

Purnia Election Result 2020: The initial trends show that the BJP's Vijay Kumar Khemka is leading from the Purnia constituency.

Patna: Strong room established at Anugrah Narayan College being opened, as counting of votes for Bihar Assembly elections to begin at 8 am pic.twitter.com/ezv9fOtHyF

Nitish Kumar, Tejashwi Yadav, Rajesh Ranjan, Chirag Paswan- Bihar Election Result 2020: It will be interesting to watch what Bihar Election 2020 holds for the Lok Janshakti Party (LJP) leader Chirag Paswan, son of late Union Minister Ram Vilas Paswan, who has created a lot of buzz during the elections. The Lok Janshakti Party (LJP) is a part of National Democratic Alliance (NDA) at the Centre, however, the party fought the Bihar Elections separately and fielded its candidates against the Nitish Kumar-led Janata Dal (United), largely.

Nitish Kumar, Tejashwi Yadav, Rajesh Ranjan, Chirag Paswan- Bihar Election Result 20205: The counting of votes begins at 8 am. The Election Commission will begin the counting with the ballot votes first and then the EVM votes. The EC has set up over 50 counting centres, spread across the 38 districts to ensure the smooth counting process. Here are the visuals from the counting centres of Patna:

Counting of votes for #BiharAssemblyPolls to take place today.

Visuals from a counting centre in Patna. pic.twitter.com/Oj1Nf5loUW

Nitish Kumar, Tejashwi Yadav, Rajesh Ranjan, Chirag Paswan- Bihar Election Result 2020: The polling for the Bihar General Election 2020 was held in three phases on October 28, November 3 and November 7. Have a look at the details:

Note: This is a developing story on Bihar Election Results 2020. We will update here the final results after the official announcement by ECI.