The apex court emphasised that a strong message should be sent to all the states and DGP of states, which states that clampdown of information is contrary to basic precepts. 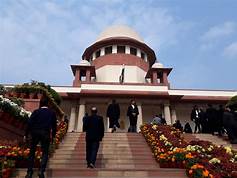 The Supreme Court on April 30, 2021 stated that there should not be any clampdown on citizens communicating their COVID-19 related grievances on social media.

An SC bench headed by Justice DY Chandrachud said strictly that if citizens communicate their grievance on social media, then it cannot be said it is wrong information. The court asserted that it does not want any clampdown of information. It said we will treat it as a contempt of court if such grievances are considered for action.

The court said this while hearing a suo motu case on issues related to the shortage in oxygen supply, medicine supply and vaccine policy in the wake of COVID-19 pandemic.

•The court emphasised that a strong message should be sent to all the states and DGP of states, which states that clampdown of information is contrary to basic precepts.

•The Bench also questioned the Centre regarding the quantity of oxygen being made available to critical states such as Delhi.

•Responding to this, Solicitor General Tushar Mehta, who was appearing on behalf of the Centre said that the Union government is providing tankers to Delhi.

•The Solicitor Genera stated that there was some scarcity of tankers and now it has been eased out. He also stated that Delhi is a non-industrial state and that is why the issue is more acute here.

•He further assured saying that oxygen has been supplied to each and every heavy load state.

•However, the court retorted pointing out, "Delhi shows that the demand has increased where there was 123 percent increase and revised need was 700 MT and then you say you allocated 490 MT? If there is a 200 MT deficit then you should give that straight away to Delhi. Centre has an important responsibility as far as citizens of Delhi are concerned."

•The court further stated that if there is a surplus in the steel sector, then use that and supply to Delhi. "Between today and Monday there will be 500 deaths in our hands," the court said.

•The court further pulled up the centre saying as a national authority that has a responsibility to the national capital you are answerable to the citizens and Delhi represents the nation.

The Supreme Court had on April 22, 2021 taken suo motu cognizance of the "alarming situation" in connection with various health emergencies including shortage of oxygen during the COVID-19 pandemic.

The court had issued a notice to the Centre seeking a response on kinds of immediate and effective action it can take to handle such a situation.

During a previous hearing, the court had asked the Centre to present and apprise it as to whether a national plan can be prepared to handle this worrisome situation.

It made these remarks, after taking into record at least six different state High Courts, including the Delhi High Court, have been hearing the matter on the same issues.