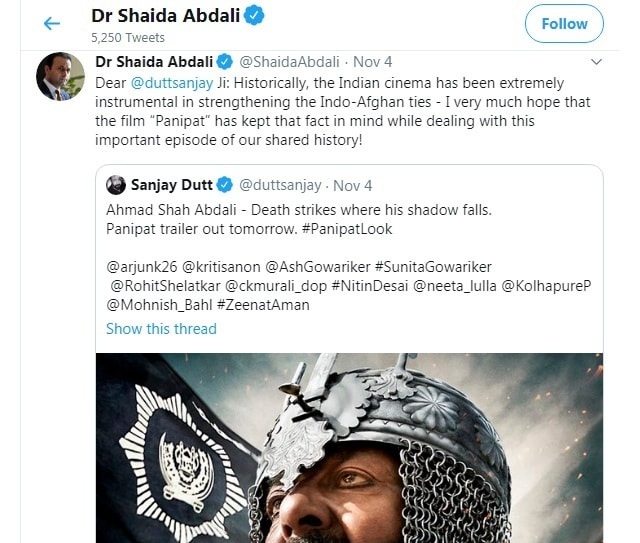 Panipat: Why Afghanistan objects to Ahmad Shah Abdali’s portrayal in the film?

The Panipat trailer, which was released on November 5, has stirred fears of impacting Indo-Afghan ties after its brutal depiction of Afghan king Ahmad Shah Abdali, who is considered as the founder of modern Afghanistan and is also regarded widely as ‘the father of the nation’.

Ahmad Shah Abdali has been portrayed as a ruthless ruler, who leaves a trail of bodies in his thirst for more power. In fact, actor Sanjay Dutt had introduced his character on twitter by saying “Ahmad Shah Abdali - Death strikes where his shadow falls.”

According to media reports, the Afghan embassy in India has expressed its concerns over the insensitive portrayal of Ahmad Shah Abdali to India’s External Affairs Ministry and has also sought a meeting with the Union Information and Broadcasting Minister Prakash Javadekar over the issue.  The officials fear that it may impact India-Afghan ties.

Third Battle of Panipat: Everything you need to know

The Third Battle of Panipat, known as one of the most significant battles ever fought in the Indian history, took place on January 14, 1761 at Panipat.

The battle was fought between the Maratha Empire and invading Afghan King Ahmad Shah Abdali. The war is reported to have lasted for several days, resulting in a large number of fatalities.

Ahmad Shah Abdali’s forces emerged victorious at the end of the battle. According to historical accounts, around 40,000 Maratha prisoners were slaughtered in cold blood after the battle.

The battle halted the Maratha empire’s attempt to expand into the north and destabilised their territories.

This is not the first time that a portrayal of a historical character has come under the scanner. Before this, Ranveer Singh’s portrayal of Alauddin Khilji in Padmaavat had also created a furor, with many historians criticizing the exaggerated portrayal of the character’s brutality and eccentricity.