Pink ball test:  Team India had played their first-ever pink ball test against Bangladesh at the Eden Gardens in Kolkata in November 2019. India had won the match. 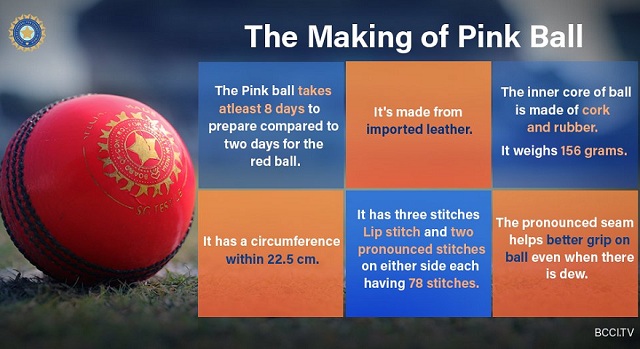 India vs England Day/Night Test, which is scheduled to start today at the new Motera stadium in Ahmedabad, will be India's third Pink Ball Test.

The Pink Ball test is another name for Day and Night Test matches, which are played with a pink ball. Team India had played their first-ever pink ball test against Bangladesh at the Eden Gardens in Kolkata in November 2019. India had won the match.

India lost its next pink ball test match against Australia in Adelaide in December 2020, when they got bowled out for their all-time lowest Test innings total of 36. India eventually lost the test by 8 wickets.

India's third pink ball test is a part of the ongoing series vs England. It will be played using the SG pink ball, which is manufactured in Meerut. The ball has a black seam.

India was the last major cricket playing nation to enter the pink-ball Test era with this match. Though the format was introduced in 2015, India was reluctant to join it until former captain Sourav Ganguly became the new BCCI Chairman.

The new regime under Sourav Ganguly decided to play pink ball test in India’s second and final test match in the two-series against Bangladesh. Ganguly managed to convince the Bangladesh Cricket Board to agree to the day and night test match.

1. The pink ball is lighter than red ball.

2. Its leather is coated with pink pigment.

3. It has an extra coating of lacquer to maintain colour and shine longer than the red ball.

4. It is easier to spot under the lights in comparison to the red ball.

5. The pink ball swings more in the initial overs.

What is a pink ball test?

Pink ball test match is a day and night test match, which is partly played under floodlights. The ball used in the match is a pink ball instead of the usual red to enable better visibility under the lights.

Why is India playing a pink ball test match?

The pink ball test matches were introduced to make the five-day format more interesting and viewer friendly. It is aimed at increasing the crowd and audience.

When was the first-ever day/ night test match played?

The first-ever day and night test match was played between Australia and New Zealand at the Oval in Adelaide, Australia from November 27 to December 1, 2019.

Which countries have played day and night test matches?

Why is a pink ball being used in day/ night test matches?

The pink-coloured ball for day/ night test matches was agreed upon, as it would be easily visible under the floodlights. It was decided upon after several failed experiments with yellow and orange balls. The main objective is for the ball to be clearly visible under the night conditions.

Why is the red ball not being used in day/ night test matches?

The red ball looks brownish under yellow floodlights, almost the same colour as the pitch. Hence it is difficult to spot.

How is the pink ball different from the red ball?

The pink ball has a better visibility under the floodlights than the red balls. While it is made up of the same material as the red ball, it is not dipped in grease, as it could affect visibility. It has a black outer seam for better grip.

India finally agreed to play day/night tests after resisting the format for long. The decision is aimed at increasing the popularity of the long-format.