The Regional Comprehensive Economic Partnership Agreement was signed by all 10 ASEAN members and key partners including China, South Korea, Japan, Australia and New Zealand at the 4th RCEP leaders summit in November 2020. 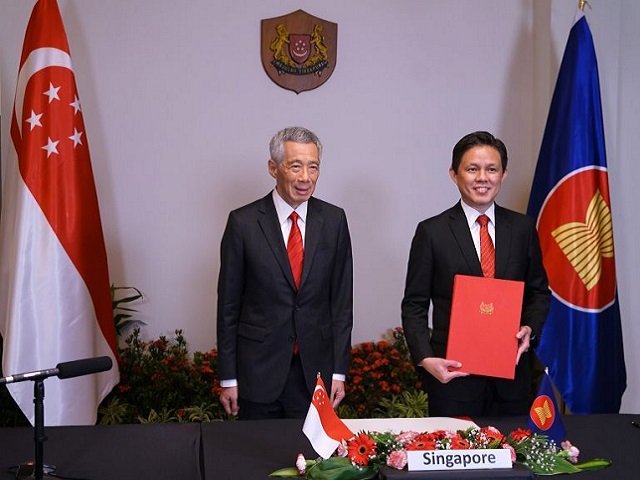 Singapore has become the first country to complete the official process for ratification of the Regional Comprehensive Economic Partnership (RCEP) agreement.

The trade pact, which is the world's largest, was signed by all 10 ASEAN members and key partners including China, South Korea, Japan, Australia and New Zealand at the 4th RCEP leaders summit in November 2020.

•Singapore is the first RCEP participating country (RPC) to complete the official ratification process and deposit its ratification instrument.

•Singapore deposited its ratification instrument with the secretary-general of ASEAN on April 9th.

•The Regional Comprehensive Economic Partnership Agreement was signed on November 15, 2020 after almost eight years of negotiations between the participating countries on the sidelines of the Association of Southeast Asian Nations (ASEAN) meeting.

•The signatories of the agreement include 10 ASEAN countries - Singapore, Thailand, Vietnam, Cambodia, Indonesia, Malaysia, Brunei, Laos, Myanmar and the Philippines and 5 key partners.

•These 15 countries account for almost 29 percent of the global gross domestic product(GDP).

•Singapore's Minister for Trade and Industry Chan Chun Sing said that Singapore's expeditious ratification of the Regional Comprehensive Economic Partnership agreement signals its strong commitment to strengthening trade and economic linkages with its partners, for the benefit of its businesses and people.

•The Minister further said that the nation looks forward to their fellow RCEP Participating Countries doing likewise, to expedite the entry into force of the agreement."

When will the RCEP agreement enter into force?

The RCEP Agreement will come into force 60 days after six ASEAN member states and three ASEAN FTA partners deposit their ratification instrument, acceptance or approval with the secretary-general of ASEAN, who has been designated as the depositary for the RCEP Agreement.

All participating countries are targeting to bring the agreement into force on January 1, 2022.