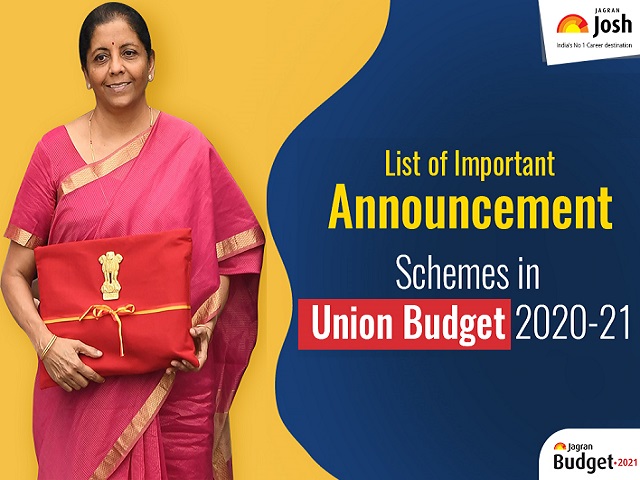 List of Important Announcement/ Schemes in Union Budget 2020-21: Union Finance Minister Nirmala Sitharaman has presented the Union Budget 2021 in the Parliament on February 1, 2021. The first paperless budget was touted as an Economic vaccine that will aid revival of the Indian economy.

The Union Budget 2021-22 is the first Budget of the new decade and the first paperless budget. It is also the third one that follows a contraction in the economy.

1. Health and Well Being

PM Atmanirbhar Swasth Bharat Yojana: PM Atmanirbhar Swasth Bharat Yojana to be launched to develop primary, secondary and tertiary healthcare systems, strengthen existing health systems and support future health interventions with an outlay of about 64,180 crores over 6 years. This will be in addition to the National Health mission and will support 17,000 rural and 11,000 urban health care centres.

-Setting up of health labs

-to connect all public health labs

Mission Poshan 2.0 to be launched to improve nutritional outcomes across 112 aspirational districts. 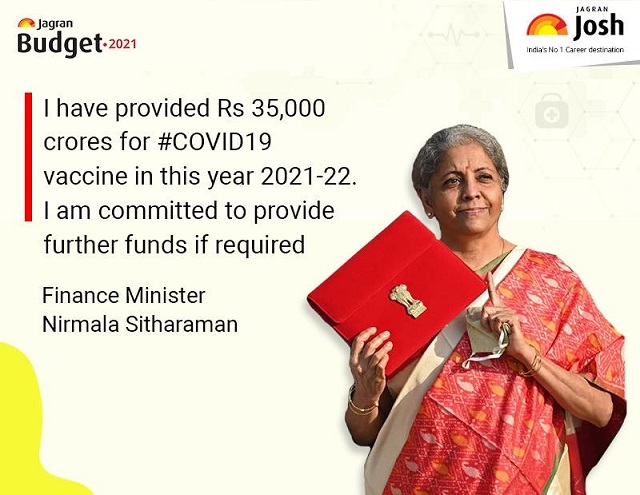 The Finance Minister stated that to realise five trillion dollar economy, India's manufacturing sector has to grow in double digits for a sustained period. A PLI scheme has been announced for 13 sectors to achieve the same with an outlay of Rs 1.97 lakh crore over the next 5 years.

Mega Investment Textile Parks- 7 textile parks will be added in the next three years.

-Proposal to set up Development Finance Institution at a cost of Rs 20,000 crore.

-A national monetising pipeline will be launched and a dashboard will be created to overlook the progress.

Propose sharp increase in Capital expenditure: The Finance Minister has proposed a sharp increase in Capital Expenditure & thus have provided Rs 5.54 lakh crores which is 34.5% more than the BE 2020-21.
Roads & Highways: Over 13,000 km length of roads at a cost of Rs 3.3 lakh cr has already been awarded under Rs 5.35 lakh cr Bharatmala project of which 3,800 kms have been constructed.
-By March 2022  another 8,500 km and an additional 11,000 kms of National Highway Corridor will be awarded.
-3900 km of national highway work will be undertaken in Tamil Nadu. The construction will start next year.
-1100 km of national highway work will be undertaken in Kerala including 600 km stretch of Mumbai-Kanyakumari corridor.
- 600km corridor to be developed in West Bengal at a cost of Rs 25000 crore
-National highway work of more than 34000 crore covering upto 1000 km will be taken up in Assam.
- The Finance Minister also provided an enhanced outlay of Rs 1,18,101 crore for ports and highways.

- A lot of airports will be monetised for operation and management.

Railway Infrastructure - National Railway Plan
The Indian Railways has prepared a National Rail Plan for India 2030. The plan is to create a future-ready railways system by 2030. The government aims to bring down the logistic cost for industry to enable Make in India. The Finance Minister proposed to provide a record sum of Rs 1,10,055 crores for Railways of which Rs 1,07,100 crores is for Capital Expenditure only.
- Western & Eastern dedicated freight corridors to be commissioned soon.
- The Somnagar Gomu section of Eastern Dedicated Corridor will be taken up this year.
-High Density network &highly utilised network routes of Railways will be provided with train protection system to eliminate train collision incidents due to human error.
- Vistadome coaches to be integrated in all tourist corridors.

Urban Infrastructure
- New scheme to be launched to support augmentation of public bus service. it will boost automobile sector and create employment opportunities for the youth and enable smooth mobility to citizens
-MetroLite and MetroNeo to be introduced in Tier 2 cities and peripheral areas of Tier 1 cities
- Additional central funding will be provided to Kochi Metro Phase II, Chennai Metro Phase 2, Bengaluru Pahse 2A and B, Nashik and Nagpur Metros.

The centre has proposed creation of a framework to allow consumers of electricity alternatives to choose from more than one distribution company.

-The major ports will be moved from operating services on their own and they can enter into public-private partnership to get private players to operate and manage it for them.

-Around 90 ship recycling yards at Alang in Gujarat to be made compliant with latest international norms.

-Recycling capacity to be doubled by 2024 to help generate an additional 1.5 lakh jobs for the youth.

Ujjwala scheme,  which has benefited 8 crore households so far, will be extended to cover 1 crore more beneficiaries

Gas pipeline network to be taken up in J&K union territory and City Gas Distribution (CGD) programme will be extended to 100 districts in next three years.

-Insurance Act 1938 proposed to be amended to increase the permissible FDI limit from 49% to 74% and allow foreign ownership & control with safeguards.

-Asset reconstruction company to be set up to take over stressed loans.

-Asset reconstruction and Asset management companies will be set up for value realisation.

-Deposit insurance: The centre has approved an increase in the cover from Rs 1 lakh to Rs 5 lakh for bank depositors.

Two PSU bank and one general insurance firm to be disinvested.

IPO of LIC to debut this year

Strategic sale of Air India, IDBI Bank and BPCL to be completed in 2021-22.

Niti Aayog to come up with the  list of companies that may be disinvested next.

The centre has also undertaken a  detailed exercise to rationalise centrally sponsored schemes on the recommendation of the Fifteenth Finance Commission.

Agriculture & Allied Sectors
- Operation Green Scheme to be enlarged to cover 22 perishable crops.
- 1000 more mandis to be integrated with E-NAM market place
-Agricultural Infrastructure funds will be made available to APMCs for augmenting their infrastructure
-MSP increased to 1.5 times
Wheat Procurement -  A total of Rs 33,874 crore was paid to farmers in  2013-14 and this was increased to Rs 62,804 crore in  2019 -20 and Rs 75,050 crore in 2020-21.

Fisheries
- Five major fishing harbours to be developed into fishing hubs for economic activity including Chennai, Kochi, Paradip, Petuaghat and Visakhapatnam.
-Seaweed farming to be promoted -Multipurpose seaweed park to be established in Tamil Nadu

-Setting up of Higher Education Commission

-1,00 Sainik Schools will be set up in partnership with NGOs, private schools, and states.

-Proposal to set up central university in Leh

- 750 Eklavya schools will be set up in tribal areas.

-An 'umbrella' structure will be created for central higher education institutions in various cities such as Hyderabad.

Deep ocean mission to be launched for the conservation of deep sea biodiversity.

-First Digital Census to be launched. The centre has allocated Rs 3,758 crore for the same this year.

-Rs 300 crore to be granted to Goa government to celebrate 50 years of liberation from the Portuguese.

-One nation one ration card scheme implemented by 32 states and union territories- covering 86 percent of beneficiaries. The remaining four states/ UTs to be integrated soon.

-Social security benefits to be extended to gig and platform workers. Minimum wage to apply to all categories of workers.  This will be ensured through the four new labour codes.

-Women will be allowed to work in all categories and also in night shifts with adequate protection.

-To further facilitate credit flows for Standup India scheme for SCs, STs and women, the Finance Minister proposed to reduce the margin capital required for loans from 25% to 15%.

The Finance Minister during the beginning of her budget speech recalled the launch of Atmanirbhar Bharat package to provide stimulus to the Indian economy. Prime Minister Narendra Modi had announced the launch of Atmanirbhar Bharat Abhiyan on May 12, 2020. The special economic package worth Rs 20 lakh crore was launched with an objective to make India self-reliant. During his address to the nation, the Prime Minister had urged people to be vocal about local.

The Atmanirbhar Bharat package was launched to provide relief to those sections of the population who have contributed significantly to the country's growth including farmers, labourers and Indian taxpayers- the middle class and the industry. The packages reportedly helped in accelerating reforms in the country.