The day’s updated quizzes cover topics such as Sheikh Zayed Book Award, Whitley Awards 2021 and African Swine Fever among others. 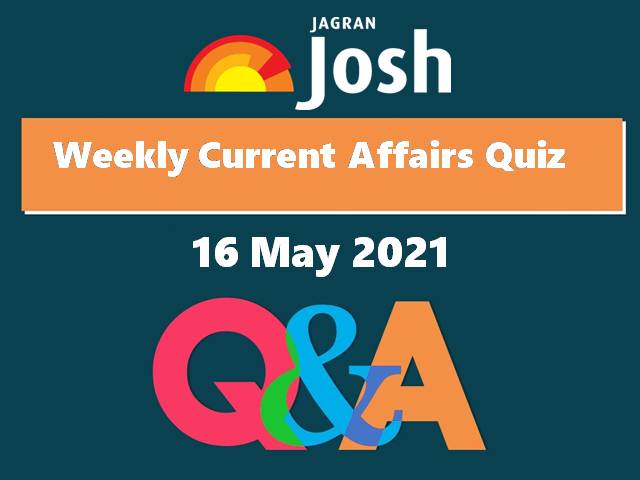 10 May to 16 May 2021: The Current Affairs Quizzes section of Jagranjosh aims to help every competitive exam aspirant to revise the day at ease. The day’s updated quizzes cover topics such as Sheikh Zayed Book Award, Whitley Awards 2021 and African Swine Fever among others.

2. India's Y Nuklu Phom has been named the winner of ‘Whitley Awards 2021' for his conservational efforts in which Indian state?
a) Meghalaya
b) Nagaland
c) Sikkim
d) Manipur

3. The Subject Expert Committee (SEC) has approved which COVID-19 vaccine for phase 2 and 3 human clinical trials on 2 to 18-year-olds?
a) Covaxin
b) Covishield
c) J&J
d) Sputnik

5. Which Indian state on May 12, 2021 reported resurgence of the African Swine Fever?
a) Madhya Pradesh
b) West Bengal
c) Uttar Pradesh
d) Meghalaya

6. Which nation will become the most populated country by 2027, as per a UN report?
a) India
b) US
c) Japan
d) Pakistan

8. Who was the founder of modern nursing?
a) Mother Teresa
b) Elizabeth Blackwell
c) Clara Barton
d) Florence Nightingale

10. NASA's OSIRIS-REx spacecraft has begun its 2-year journey back to Earth after collecting samples from which asteroid?
a) Ceres
b) Juno
c) Vesta
d) Bennu

1. (d) Tahera Qutbuddin
Dr. Tahera Qutbuddin has become the first person from India to win the prestigious Sheikh Zayed Book Award.  The Mumbai-born professor won the honour for her book 'Arabic Oration: Art and Function', which was published by Brill Academic Publishers of Leiden in 2019.

2. (b) Nagaland
Nagaland Conservationist Y Nuklu Phom was named the winner of ‘Whitley Awards 2021', also known as the Green Oscar, donated by MAVA Foundation on May 12, 2021 for his efforts in establishing a biodiversity peace corridor in Nagaland.

3. (a) Covaxin
The Subject Expert Committee (SEC) has approved Bharat Biotech's Covaxin for phase 2 and 3 human clinical trials on 2 to 18-year-olds.

5. (d) Meghalaya
Meghalaya on May 12, 2021, informed that the resurgence of the African Swine Fever (ASF) has killed over 300 pigs in the last month. The State’s Animal Husbandry and Veterinary Department have confirmed the presence of the ASF in the districts of East Khasi Hills, West Khasi Hills, Ri Bhoi, and the sub-division of Sohra.

6. (a) India
India may cross China as the world's most populous country by 2027, forecasts a UN report published in 2019. The report stated that India will remain the most populated country through the end of the current century.

7. (d) India
According to the United Nations, India will be the world's fastest-growing major economy in 2022. In its mid-year update of the World Economic Situation and Prospects (WESP), the UN has projected that the Indian economy will grow at 10.1 percent in the calendar year 2022.

8. (d) Florence Nightingale
Florence Nightingale, a British nurse was instrumental in changing the role and perception of the nursing profession. She is known as the founder of modern nursing as she was the first to establish formal training for nurses. The International Nurses Day is observed annually on her birth anniversary on May 12th.

9. (a) US
The United States Food and Drug Administration on May 10, 2021, gave the emergency use approval to Pfizer-BioNTech Covid-19 vaccine for the children in the 12-15 age group. The US government aims at setting up shots for many before the beginning of the next school year.

10. (d) Bennu
NASA's OSIRIS-REx spacecraft began its historic 2-year mission back to Earth after collecting samples from asteroid Bennu on May 10, 2021. This is NASA's first asteroid sample return mission and it carries a generous amount of material collected from the near-Earth asteroid.