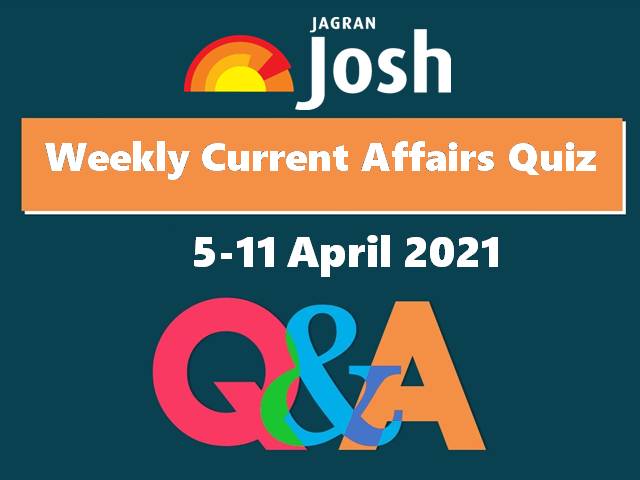 5 April to 11 April 2021: The Current Affairs Quizzes section of Jagranjosh aims to help every competitive exam aspirant to revise the day at ease. The week's updated quizzes cover topics such as Chhattisgarh Veerni Award, world's highest railway bridge and 27th Screen Actors Guild Awards among others.

2. Who among the following has been selected for the Chhattisgarh Veerni Award?
a) Hima Das
b) Dutee Chand
c) Saina Nehwal
d) Mary Kom

4. Which film won the top honour of outstanding performance by a cast in a motion picture at 27th Screen Actors Guild Awards?
a) Da 5 Bloods
b) Minari
c) The Trial of the Chicago
d) One Night in Miami

5. Who has been appointed as the Chairman of Airports Authority of India?
a) Sandeep Mehta
b) Sanjeev Kumar
c) Vineet Sinha
d) Shromit Bannerjee

7. Which country has temporarily banned travellers from India including its own citizens?
a) US
b) Australia
c) New Zealand
d) Canada

8. Vjosa Osmani-Sadriu was sworn in as the second Female President of which Balkan nation?
a) Albania
b) Bulgaria
c) Croatia
d) Kosovo

10. Who topped the Forbes billionaires list 2021 with a net worth of $177 billion?
a) Elon Musk
b) Bernard Arnault
c) Mukesh Ambani
d) Jeff Bezos

12. Which nation's President has signed a law enabling him to run for President again?
a) Russia
b) UK
c) Japan
d) Sri Lanka

1. (c) 12.5 percent
The International Monetary Fund on April 6, 2021 projected a 12.5% growth rate for India in the year 2021. India's growth projection is stronger than that of China which was the only major economy globally to have a positive growth rate amid the pandemic in 2020.

2. (b) Dutee Chand
Dutee Chand will be honoured with the Chhattisgarh Veerni Award at the inaugural edition of the awards that is scheduled to be held on April 14, 2021.

3. (a) Jammu and Kashmir
Northern Railways completed the construction of the arch closure of the Chenab Bridge, the world’s highest railway bridge on April 5, 2021. The 1.3-kilometre-long bridge sits at a height of 359 metres above the bed of the Chenab river in the Jammu & Kashmir state.

5. (b) Sanjeev Kumar
Senior IAS officer Sanjeev Kumar took over as chairman of the Airports Authority of India on April 7, 2021. Kumar is a 1993 batch IAS Officer from Maharashtra Cadre. He was previously posted as State Commissioner-GST of the Maharashtra Government.

6. (d) RBI
The Reserve Bank of India will be constructing and periodically publishing a "Financial Inclusion Index". The index will measure the extent of financial inclusion in the country. It will be published annually in the month of July.

7. (c) New Zealand
New Zealand on April 8, 2021 temporarily suspended entry for all travellers from India, including its own citizens due to high number of COVID-19 cases in the country. This suspension will be for about two weeks and it comes after New Zealand recorded 23 new COVID-19 cases at its border, 17 of which were from India.

8. (d) Kosovo
Vjosa Osmani-Sadriu was sworn in as post-war Kosovo's second Female President and seventh overall on April 4, 2021. She was sworn in for a five-year term period.

11. (d) Alfred V Aho
Alfred V. Aho has won the AM Turing Award 2020 for his research and influential textbooks on fundamental algorithms and theory underlying programming language implementation. His books have educated generations of computer scientists.

12. (a) Russia
The President of Russia Vladimir Putin on April 5, 2021, gave his final approval to the legislation that allows him to hold office for two additional 6-year terms. It gives him the possibility to stay in power till 2036.