The day’s updated quizzes cover topics such as most liveable city in the world, PEN Pinter Prize 2021, India's GDP growth and YounTab Scheme among others. 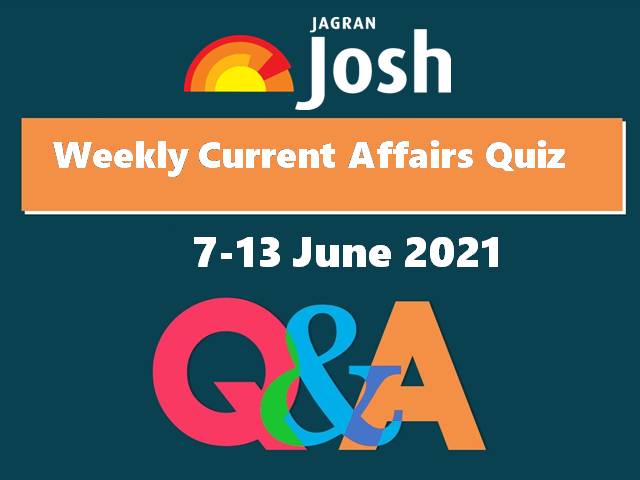 7 June to 13 June 2021: The Current Affairs Quizzes section of Jagranjosh aims to help every competitive exam aspirant to revise the day at ease. The day’s updated quizzes cover topics such as most liveable city in the world, PEN Pinter Prize 2021, India's GDP growth and YounTab Scheme among others.

2. Who among the following billionaires is planning to travel to space in July 2021?

3. When was World Environment Day observed?

4. When is World Day Against Child Labour?

5. According to World Bank's report on post-Covid-19 recovery, India's GDP is expected to grow how much in the current fiscal year?

6. Which city was declared as the most liveable city in the world in the 2021 EIU Global Liveability Ranking?

7. Which state/ UT has launched YounTab Scheme for students?

8. Abdulla Shahid has been elected as President of the 76th United Nations General Assembly session. He is the foreign minister of which nation?

9. Which nation is building its first fully stealth naval warship?

10. Which nation has become the first country to make Bitcoin legal tender?

11. Who has become the second-highest active international goalscorer?

Tsitsi Dangarembga, the booker-shortlisted writer from Zimbabwe, has won the PEN Pinter Prize 2021. Tsitsi Dangarembga is the author of the book ‘Nervous Conditions’, which she wrote at the age of 25. It was followed by ‘The Book of Not’ and the third part of the trilogy ‘This Mournable Body’, which was also shortlisted for Booker Prize 2020.

Jeff Bezos, Founder and CEO of Amazon announced on June 7, 2021, that he will travel to space on July 20, 2021. He will fly to space along with his brother Mark on the first crewed flight capsule New Shepard built by his company Blue Origin.

World Environment Day is observed every year on June 5th all around the world with an aim to engage citizens, businesses, and governments to understand the importance of the environment and address environmental issues. The day's theme this year was ‘Reimagine, Recreate, Restore’ with a focus on ecosystem restoration.

World Day Against Child Labour is observed every year on June 12, 2021. One in almost ten children across the world is in child labour. Though the number of children in child labour has declined by 94 million since 2000, the rate of reduction has slowed by two-thirds in recent years.

The World Bank has forecasted India's GDP growth for FY 2021-22 to be 8.3 percent, supported by plans for higher spending on health, rural development, infrastructure and a stronger-than-expected recovery in services.

Auckland was declared as the most liveable city in the world on the 2021 edition of the Economist Intelligence Unit’s (EIU) annual Global Liveability Ranking. Adequate measures by New Zealand at containing the COVID-19 pandemic allowed its cities like Auckland and Wellington to re-open and enjoy a lifestyle similar to pre-pandemic life.

The Lieutenant Governor of Ladakh, RK Mathur on June 4, 2021, launched the YounTab Scheme for the students. Under the scheme, 12,300 tablets with pre-loaded online and offline content, will be distributed to the students of the Government schools from class 6th to 12th.

The Foreign Minister of Maldives, Abdulla Shahid on June 7, 2021, was elected as the President of the 76th session of the United Nations General Assembly (UNGA). He garnered 143 votes out of 191 ballots cast.

Russia is building its first stealth naval warship that will be fully equipped with stealth technology making it hard to detect it by enemy vessels. This was reported by the Russian media on June 8, 2021.

El Salvador on June 9, 2021, became the first country in the world to grant legal tender status to Bitcoin. The El Salvador Congress approved the bill to make Bitcoin a legal tender in the country. Bitcoin is the world's largest cryptocurrency.

Indian football captain Sunil Chhetri has overtaken Argentinian star Lionel Messi to become the second-highest active international goalscorer on June 7, 2021. Chhetri has now scored 74 goals, two more than Messi and is now only behind Portugal star Cristiano Ronaldo who has scored 103 goals. UAE's Ali Mabkhout is third on the list with 73 goals, while Messi is fourth with 72 goals.

Shikhar Dhawan will captain Team India on its six-match ODI and T20 tour of Sri Lanka, which is scheduled to be held at the R Premadasa International Cricket Stadium in Colombo between July 13-25, 2021.