Why is India facing a coal shortage? How will it impact power generation and industries?

Explained: Why is there coal shortage in India? How will it impact power generation and industries? What measures is the govt taking to tackle the coal shortage?

India is facing a severe coal crisis with over half of its coal-fired power plants left with coal stocks that would last less than three days while 80 per cent of its plants left with less than a week’s coal stock. As of September 29, 2021, almost 16 out of 135 coal-fired power plants in India had zero coal stocks, according to the Central Electricity Authority (CEA). Coal accounts for more than 70 per cent of India's electricity output and utilities account for approximately 75 per cent of India's coal consumption.

Why is there coal shortage in India?

India is the world’s 2nd largest importer of coal though it has the 4th largest coal reserves. Three-fourths of India's electricity demand is fulfilled with coal. In a report by S&P’s unit CRISIL, the Asian coal prices (global coal prices) are expected to continue to rise. The coal inventory at Indian thermal plants is expected to improve gradually only by March 2022. But as of now, the power plants are struggling to meet the surging demand for power production as economic activity rebound from the second wave of the COVID-19 pandemic.

Amid the second wave of the COVID-19 pandemic in India, the industrial power demand witnessed a surge in the country. States such as Gujarat, Maharashtra, Tamil Nadu reported increased power consumption between 13.9 per cent to 21 per cent in the 3 months ending September 2021, as per data analysis by POSOCO. The addition of 28.2 million households is also adding to the surge in power demand touching 200 GW during the COVID-pandemic. 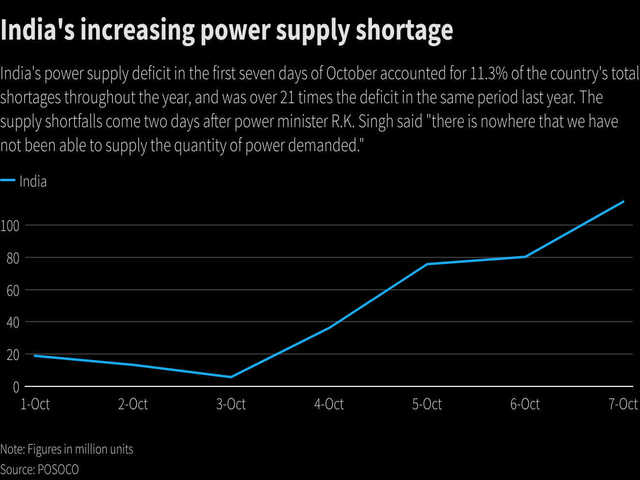 The rising coal prices have caused a sharp fall in imports. India’s average weekly coal imports from August to September 2021 dropped by over 30 per cent from the average for the first seven months of 2021 hovering just under 3 million tonnes. The recent week ending reported import total less than 1.5 million tonnes and with no new tenders from any major coal importing state utilities. Strict supply constraints, mine safety checks, and high demand from China have been fueling the latest coal price surge in imports. India mostly imports coal from Indonesia, Australia, and South Africa.

Apart from India’s surge in industrial power demand and rising global coal prices, other key reasons for coal shortage in the country are lower coal-stock accumulation by thermal power plants during April-June 2021 and worsened by heavy rainfalls in coal-bearing areas during August-September 2021 leading to lower production and lesser dispatches of coal from the mines.

Coal shortage in India: How will it impact power generation and industries?

On October 4, 2021, a widening gap of more than 4 gigawatts was reported between available electricity supply and peak demand, as per the Power Ministry. However, power shortages or outages are unlikely.  The Union Power Minister R K Singh said the coal shortage in India is expected to last for the next five to six months but there will be no need for rationing (cutting power supplies). "We are closely monitoring the coal supplies," he said.

However, a deepening shortage of coal shortage in the country could lead to industries facing electricity shortages which could, in turn, hamper India’s economy revival after the COVID-19 pandemic including some businesses to downscale production such as steel, cement, manufacturing, energy sectors. Add to that, with the vast population and underdeveloped energy infrastructure, the power shortage will be acute.

The Power and Railway ministries, Coal India Limited, Power System Operation Corporation, and the Central Electricity Authority have constituted an inter-ministerial team to monitor the supply of coal to thermal power plants. The government has directed thermal plants to boost their coal output and prioritize the supply of coal to plants with low levels of stock.