CAT Test Centers: IIM Indore will soon announce the list of test centers after the announcement of official CAT notification. Last year, CAT Exam was conducted in 156 test cities by IIM Kozhikode. Considering the popularity of the exam, more and more cities are getting added to the list of CAT test centers to let the CAT aspirants gain accessibility to appear in the MBA Entrance test. From 136 CAT test centers in 2015, at present the list has reached to 156 CAT Exam cities. The intent behind the gradual expansion of CAT Exam test cities is aimed at making India’s biggest B-school entrance test more accessible to the MBA aspirants from tier 2 and smaller towns. 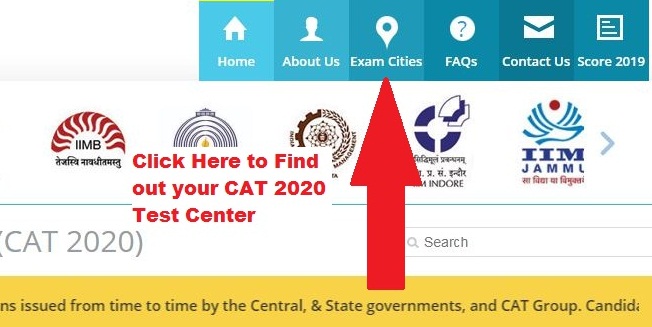 2. Even candidates of Assam domicile can apply for two new CAT test centers. Cities namely Jorhat and Tezpur have made it to the CAT Assam Test Centers.

3. In Bihar, Purnea, that was earlier a part of CAT exam centers, has been dropped, however, three new cities namely Arrah, Bhagalpur, Darbhanga have been added to CAT Bihar Test Centers.

4. Aspirants residing in Chandigarh have got one more choice for their convenience i.e. Mohali.

5. Being a bigger state in terms of area, Chhattisgarh has also got one more test venue named Bilaspur. Candidates can apply to Bilaspur CAT test center as well.

6. Candidates of Delhi residing in the Delhi-NCR region need not travel a long way. CAT Delhi Test Centers include cities namely Faridabad, Gurugram, Ghaziabad, Greater Noida, Meerut. It should be noted that Faridabad and Gurgaon were earlier included in the list of Haryana Test Centers.

7. Two test centers from Goa have been dropped this year named Madgaon and Panaji. However, the CAT 2019 exam will be conducted in Mapusa for the candidates.

10. For the Himachal Pradesh CAT aspirants, Waknaghat, that was earlier included in the list, has been removed from this year onwards.

11. On similar lines, candidates of Jammu and Kashmir can only apply to Jammu test centers. Samba has been dropped from the list.

13. In Karnataka, another city named Shivamogga (Shimoga) has been added to the list of CAT Karnataka test centers.

14. For the candidates of Kerala, cities namely Malappuram, Kasaragod have been dropped. Instead, cities namely Kannur, and Kottayam have made it to CAT test centers.

15. Madhya Pradesh has got Satna and Ujjain apart from Bhopal, Gwalior, Indore, Jabalpur, and Sagar in the list of CAT 2019 exam centers.

16. Two more test cities have been added for the CAT aspirants of Maharashtra. Palghar, and Vasai have been included in the list of CAT test centers.

17. Cities named Baranbaki, and Mathura have been dropped from the list for the candidates of Uttar Pradesh, whereas Aligarh, Jhansi, and Moradabad have been added to this list. Cities namely Greater Noida and Noida have been shifted under the Delhi-NCR region.

Another significant development with regards to CAT 2019 test cities is that a few small towns and cities have been excluded from the list, and many new small towns and tier 2 cities are added this year. This was done with intent to bring the test centers closer to the aspirants and make the country’s biggest B-school admission test more accessible to interested candidates. The new test cities added to the CAT 2019 test center have been highlighted for you to identify in an instant. Take a look at state-wise list of CAT exam centers: