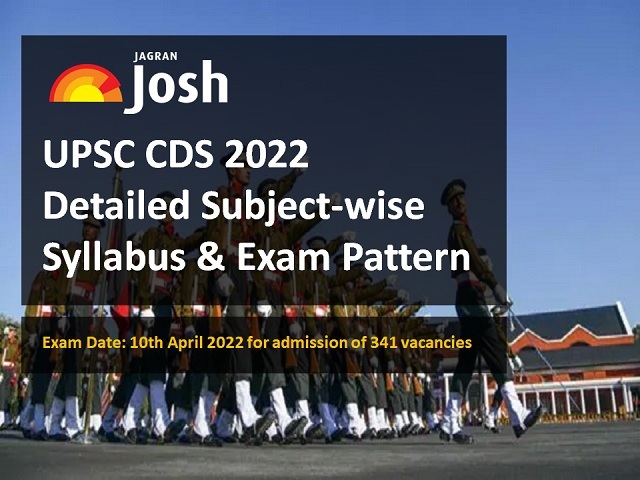 UPSC CDS Syllabus & Exam Pattern 2022: The Union Public Service Commission (UPSC) will be conducting the UPSC Combined Defence Services 1, 2022 Exam on 10th April 2022 for admission of 341 vacancies in the Indian Military Academy (IMA), Indian Naval Academy (INA), Air Force Academy (AFA), Officers’ Training Academy (OTA) (both Men & Women). The eligible candidates shall be issued an e-Admit Card three weeks before the commencement of the examination.  Candidates will be able to download the UPSC CDS 1 2022 Admit Card till 10th April 2022. In the UPSC CDS Written Exam, candidates will be asked questions from three sections - General Knowledge, Elementary Maths, and English Language. Shortlisted candidates in the written exam will be called for SSB Interview. In this article, we have shared the detailed subject-wise syllabus and the latest exam pattern of the UPSC CDS 1 2022 Written Exam.

For Admission to Officers’ Training Academy

The UPSC will prepare a list of candidates who will obtain the minimum qualifying marks in the Written Exam as decided by the Commission. These candidates will be called for the Intelligence and Personality Test. The SSB Interview carries equivalent marks as that of the written exam. For IMA/INA/AFA courses, the SSB Interview holds 300 marks and for OTA, the interview holds 200 marks.

The SSB test procedure in the UPSC CDS (1) 2022 consists of a two-stage Selection process - Stage I and Stage II. Only those candidates who clear stage I are permitted to appear for stage II. The details are:

(a) Stage I comprises of Officer Intelligence Rating (OIR) tests are Picture Perception* Description Test (PP&DT). The candidates will be shortlisted based on the combination of performance in the OIR Test and PP&DT.

(b) Stage II Comprises of Interview, Group Testing Officer Tasks, Psychology Tests, and the Conference. These tests are conducted over 4 days. The details of these tests are given on the website www.joinindianarmy.nic.in.

The personality of a candidate is assessed by three different assessors viz. The Interviewing Officer (IO), Group Testing Officer (GTO), and the Psychologist. There is no separate weightage for each test.

Success at the examination confers no right of admission to the Indian Military Academy, Indian Naval Academy, Air Force Academy, or the Officers' Training Academy as the case may be. The final selection will be made in order of merit subject to medical fitness and suitability in all other respects and the number of vacancies available.