Four planets and the moon to align this week: Here's what stargazers need to know

Four planets and the Moon will line up this week in a rare cosmic treat to stargazers while Mercury will join the planetary alignment in mid-June. Here's what you need to know.

Alignment of planets 2022: In a rare cosmic treat to stargazers, four planets will align this week. The quartet will be visible from the naked eyes across the predawn sky throughout April.

Saturn, Mars, Venus, and Jupiter will be visible in the wee hours of April 23 in the northern hemisphere, while the crescent Moon will join the alignment on April 25 and 26. In mid-June, Mercury will join this club.

In early April, Venus, Mars, and Saturn form a trio in the sky. Not to be left out, catch Jupiter similarly close to Venus on April 30.

Towards the end of March 2022, Venus, Mars and Saturn became night-sky neighbours. During the first week of April, they came so close that Mars and Saturn appeared less far apart than the width of the full moon in the southeast early morning sky when viewed from the Earth. Jupiter joined the trio in mid-April.

Alignment of Planets 2022: When to watch?

The celestial enthusiasts can watch the alignment of four planets and the Moon on April 23 in the northern hemisphere 60 to 45 minutes before sunrise. The Moon will stay above the horizon until April 29, but the four plants will remain in their cosmic line until early July. Mercury will align in early June, and late June will provide the best viewing conditions for the alignment. 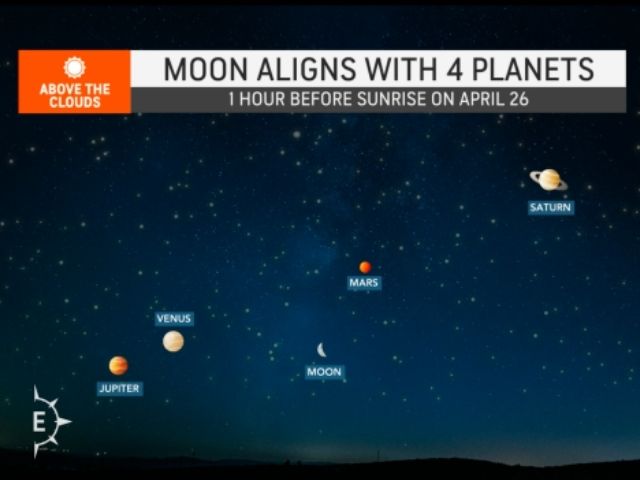 Additionally, two other planets, Uranus and Neptune will also be visible in the Northern Hemisphere during the alignment. Uranus will be sandwiched between Mercury and Mars and can be visible from the naked eyes in areas with less light pollution, while Neptune can only be viewed with the help of a telescope.

But, how do you differentiate the planets from the stars in the sky? "Stars twinkle, planets don't," said Michelle Nichols, the director of public observing at Chicago's Adler Planetarium.

READ | Who is Priyanka Srivastava? All about Indian Origin Woman on NASA's Mars Mission

Why do planets align?

Planets align when their orbital paths bring them to the same region of the sky when viewed from the Earth. While these planetary alignments are not rare, they do not occur regularly either.

When was the last time planets aligned in the night sky?

The last time planets aligned in the night sky was in the year 2020. This was preceded by the planetary alignments in 2016 and 2015.

The upcoming planetary alignment is referred to as conjunction by the astronomers. This will be the closest when Jupiter and Venus have appeared in the night sky since November 2019.

Apart from keeping an eye out for the planetary meetup, the skygazers will also be able to catch sight of the annual Lyrid meteor shower that will remain active until April 29.

READ | What is Jupiter Saturn Conjunction? Know all about the celestial event and how to watch here