Ambedkar Jayanti 2021: 14th April is observed as the birth anniversary of Dr. B. R. Ambedkar and 2021 marks his 130th birthday. It is also celebrated as 'Bhim Jayanti'. On his birth anniversary, let us have a look at some inspirational quotes, poems, his speeches, wishes, etc. 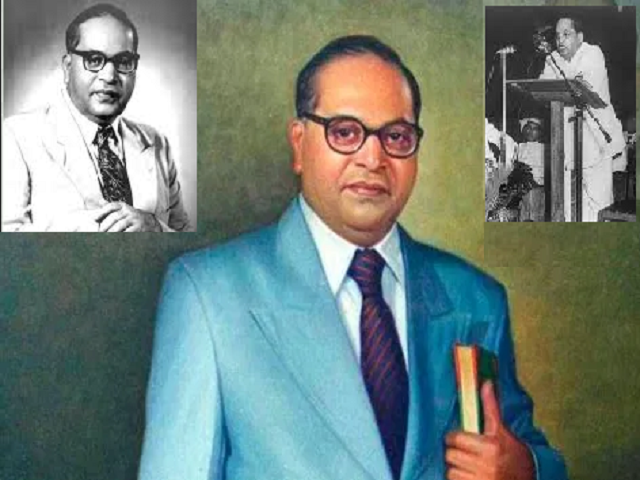 Ambedkar Jayanti 2021: Dr. B. R. Ambedkar is regarded as an architect of the Indian Constitution. His birth anniversary is observed on 14 April and is also known as "Bhim Jayanti". In 1990, he was posthumously awarded the Bharat Ratna, India's highest civilian award.

His first birthday was publicly celebrated in Pune in 1928 by one Janardan Sadashiv Ranapisay, an ‘Ambedkarite’ and a social activist.

1. "The history of India is nothing but a history of a mortal conflict between Buddhism and Brahminism."

3. "I like the religion that teaches liberty, equality, and fraternity."

4. "I measure the progress of a community by the degree of progress which women have achieved."

5. "A great man is different from an eminent one in that he is ready to be the servant of society.”

6. “Life should be great rather than long."

7. "Cultivation of mind should be the ultimate aim of human existence."

8. " Political tyranny is nothing compared to the social tyranny and a reformer who defies society is a more courageous man than a politician who defies Government."

9. "The history of India is nothing but a history of a mortal conflict between Buddhism and Brahminism."

10. “If I find the constitution being misused, I shall be the first to burn it.”

13. "Indifferentism is the worst kind of disease that can affect people."

14. "Men are mortal. So are ideas. An idea needs propagation as much as a plant needs watering. Otherwise, both will wither and die."

15. "Constitutional morality is not a natural sentiment. It has to be cultivated. We must realise that our people have yet to learn it. Democracy in India is only a top-dressing on an Indian soul which is essentially undemocratic."

16. "The relationship between husband and wife should be one of closest friends."

17. " Constitution is not a mere lawyers document, it is a vehicle of Life, and its spirit is always the spirit of Age."

18. "Equality may be a fiction but nonetheless one must accept it as a governing principle."

19. "Religion is for man and not man for religion."

20. "A bitter thing cannot be made sweet. The taste of anything can be changed. But poison cannot be changed into nectar."

Poems on Dr. B. R. Ambedkar

do have a reality check
see your ardent Buddhist mate
succeed far beyond the rest
whats dragging you behind,
is you and your own mind,
if one man can do it,
you too can do it,

don’t complain later,
come together follow dr. Ambedkar,
arise, awake and gain buddhist sight,
to conquer the caste might,
to overcome your past atrocity,
see right into future possibility,
be educated, united and agitate,
nothing else could mitigate.
By Rahul

Today on whose birthday, we are singing.
To do something in life, we are learning.
By taking inspiration from which, going on the path of progress.

There was a problem in society, in the village village people.
How could Baba, who was with him in his mind?
It was supposed to bring prosperity, India's mother was in the trunk.
In the particle of this mite, which had blown new life.
Jeevan Zia who spread the happiness in the whole world.
Those Yugnyaant Yugpurush, Vayamrao Ambedkar.
Ambedkar Ambedkar Ambedkar Ambedkar ||
By unknown

Excerpts from the Speeches of Dr. B. R. Ambedkar

2. Social democracy
What does social democracy mean? It means a way of life which recognises liberty, equality and fraternity as the principles of life. These principles of liberty, equality and fraternity are not to be treated as separate items in a trinity. They form a union of trinity in the sense that to divorce one from the other is to defeat the very purpose of democracy.
Liberty cannot be divorced from equality, equality cannot be divorced from liberty. Nor can liberty and equality be divorced from fraternity. Without equality, liberty would produce the supremacy of the few over the many. Equality without liberty would kill individual initiative. Without fraternity, liberty would produce the supremacy of the few over the many. Without fraternity, liberty and equality could not become a natural course of things. It would require a constable to enforce them.
We must begin by acknowledging the fact that there is a complete absence of two things in Indian Society. One of these is equality. On the social plane, we have in India a society based on the principle of graded inequality which we have a society in which there are some who have immense wealth as against many who live in abject poverty.

3. “Why does a human body become deceased?
The reason is that as long as the human body is not free from suffering, mind cannot be happy.
If a man lacks enthusiasm, either his body or mind is in a deceased condition....
Now what saps the enthusiasm in man?
If there is no enthusiasm, life becomes drudgery - a mere burden to be dragged. Nothing can be achieved if there is no enthusiasm.
The main reason for this lack of enthusiasm on the part of a man is that an individual looses the hope of getting an opportunity to elevate himself.
Hopelessness leads to lack of enthusiasm.
The mind in such cases becomes deceased....
When is enthusiasm created?
When one breaths an atmosphere where one is sure of getting the legitimate reward for one's labor, only then one feels enriched by enthusiasm and inspiration.”